Butler Newsroom > Events > Seeing Auschwitz Through the Eyes of a Survivor
Butler’s Student-Run Insurance Co. to Start Up Early Outstanding Alumni to Be Recognized at Homecoming ’16

Seeing Auschwitz Through the Eyes of a Survivor

What was it like to visit Auschwitz with a Holocaust survivor? Ellie Hersh ’16 will share her experiences of traveling with Eva Kor when she speaks on September 29 at 6:15 PM in the Reilly Room. 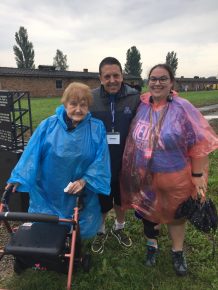 Eva Kor, her son Alex Kor ’83, and Ellie Hersh outside barracks at Auschwitz.

In July, Hersh traveled with Kor—who spoke at Butler’s 2015 spring commencement and again that fall at the Celebration of Diversity Distinguished Lecture Series—and 100 others to see the remains of the Auschwitz concentration camp.

Hersh’s trip was paid for through a fund endowed by Dr. David Gerstein, an Indianapolis dermatologist and friend of Butler University who lectures and works with Physician Assistant students. The Bruce and Lucy Gerstein Holocaust Education Travel Fund, named for Gerstein’s parents, supports travel and research related to the Holocaust. Hersh was its first recipient.

In a preview of her talk, Hersh said Kor taught her and the rest of the group an indelible lesson: We must forgive.

“‘People think I’m going to go to Auschwitz and cry,’” Kor told Hersh and the others on the trip, “‘but I go there to laugh and celebrate because I survived this place.’”

Kor did laugh and celebrate, Hersh said. When it rained during their visit, Kor sang “Raindrops Keep Falling On My Head” and “Singing in the Rain.” She smiled and made jokes and introduced herself to strangers.

While some visitors they encountered found Kor’s conduct disrespectful, Hersh, who studied Elementary Education and now teaches at Hasten Hebrew Academy of Indianapolis, watched her in awe.

“It’s so easy to be hateful and so hard to forgive,” Hersh said. “She’s able to live her life and be happy and be a contributing part of society. It’s so eye-opening how happy she is, even with everything that she went through.

“Forgiveness is a huge thing,” Hersh said. “She has forgiven the Nazis, and forgiveness is such a hard thing to do but such an important thing to do. As a teacher, I think it’s an important thing to teach my students. I teach kindergarten and I’m not going to say to my students, ‘Eva forgave the Nazis, so you should be able to forgive Teddy for stealing your toy.’ They’re not going to understand that. But I can take the lessons that I learned and see the joy and try to teach that.”