Danko Says Butler Is Strong and Getting Stronger

President James M. Danko said in his 2016 State of the University address that Butler is strong academically, financially, reputationally, and otherwise, and he challenged the University community to keep the success going. 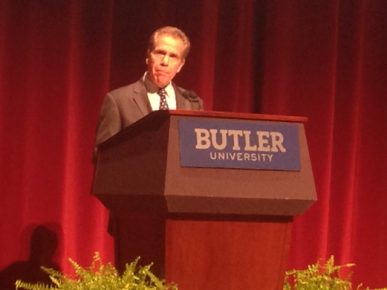 “I believe it is imperative that we at Butler demonstrate courage and confidence as we confront the very real challenges facing higher education institutions in an era of increasing competition for enrollment, unprecedented scrutiny over costs, and questions in the national dialogue of whether college is ‘worth it,’” Danko said on October 7 at the Schrott Center for the Arts in his sixth State of the University address.

Among the successes Danko touched on were:

-Finishing last year under budget and with a more than $1 million surplus.

-Attracting the largest first-year class in Butler’s history. In addition, Butler’s retention rate of returning students increased across all classes.

-Fundraising efforts that brought in nearly $45 million in the last year.

“Rather than running a large budget deficit this year, we now anticipate having our best financial results ever, well on the positive side,” he said.

Danko also noted successes in new facilities, U.S. News & World Report ranking as the most innovative university in the Midwest, and overwhelmingly positive results from a Gallup poll that has Butler ahead of peer and aspirant universities on the impact a Butler education has on the lives and careers of alumni.

Danko said the University will continue to grow, with a new building planned for the Lacy School of Business and renovation of Holcomb and Gallahue halls scheduled to create a science complex. Groundbreaking for both projects could take place as early as next summer, he said.

In closing, Danko challenged the University community to focus effort and energy to:

-Improve Butler’s campus environment and dialogue when it comes to diversity and inclusivity.

-Enhance and improve communication across our community.

“I am proud of the fact that over the past few years, when we could have just as easily kept our heads down and continued to do things the same way as always—hoping that the storm would pass and we’d weather it—we instead had the confidence to invest deeply in the type of education we believed was right for our students,” Danko said. “While preserving critical philosophical elements that are central to a Butler education and the Butler Way, we had the courage to innovate and change both inside and outside the classroom, and the confidence to invest in differentiating Butler as a premier, nationally recognized University.”