Butler Is One of His Favorite Things

The last time Ben Davis sang onstage in Indianapolis, it was as a member of the Butler Chorale. The next time will be January 10-15 at the Murat Theatre, where he will portray Captain Georg von Trapp in the national touring company of The Sound of Music. 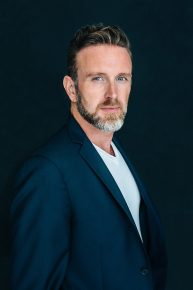 Davis grew up in Indianapolis, attended Butler in the mid-1990s as a voice major, and credits Jordan College of the Arts faculty such as Steven Stolen with preparing him for a career that has included Broadway roles in Les Miserables and A Little Night Music, and a 2003 Tony Honor for Excellence for his work in Baz Luhrmann’s production of the opera La Boheme.

“I was not a serious student,” he said. “I wasn’t one of those people who usually gravitates toward Butler. Butler is an incredibly well-respected university. But I had an incredible support team from Butler that helped me as much as they could and gave me a foundation upon which I could build this career. I can honestly say that if it weren’t for my two years at Butler, I wouldn’t be here.”

After leaving Butler, Davis went to work at a financial brokerage firm in Indianapolis. His mother bought him a Chicago trade paper where he saw an audition for The Phantom of the Opera. He tried out but didn’t hear anything. Six months later, he was invited to audition for Les Mis in New York. Again, the phone went silent for a time.

When the call finally came, the producers said they wanted him for the ensemble role Feuilly. But they hadn’t heard how high he could sing, and they needed him to be able to hit a high A. They asked him to get on the phone with the music director.

“I was so naïve and so green that I said, ‘Yeah, why not?’” he remembered. “The good part is that this was before Facetime, so I could make any face and contortion to get the note out.”

He hit the note and got the part.

He was 21 when he was cast, 22 when he started a 3½-year run in the national touring company. On September 10, 2001, he joined the Broadway production as Enjolras.

That led to La Boheme, an opera on Broadway in Italian, for which he and the other principals (who were double and triple cast) won the Tony. When that closed, he got cast immediately in Thoroughly Modern Millie opposite Sutton Foster, with whom he had done Les Mis.

After that, he moved to Los Angeles for three years of theatre and TV work before heading to London to be in a film version of the opera The Magic Flute directed by Kenneth Branagh and recorded at Abbey Road Studios. Then it was back to New York for the first revival of Les Mis (he played Javert), two years on the road in Spamalot (directed by Mike Nichols), time in A Little Night Music (which starred Elaine Strich and Bernadette Peters) and concert performances of Kurt Weill’s Knickerbocker Holiday opposite Kelli O’Hara and Victor Garber.

Davis also performed in The Sound of Music in Nashville and at the Paper Mill Playhouse in New Jersey. In this production, he gives von Trapp a new spin.

“It’s more about just making him human,” he said. “I think over time the role has become so stoic and so one-note, and that’s not who we are as human beings. It’s understanding that there’s a reason for his sullenness and the gray cloud hanging over him, and there’s a reason he needs that discipline in his children and he’s gone back to his military days of discipline. So it’s about exploring those reasons and finding when that changes during the show, why it changes and how he reacts to that.”

And he’s excited to get to do this in front of family and friends.

“In 20 years of doing this, I’ve never played Indianapolis,” Davis said. “This is my first time. I’m so excited, I can’t begin to tell you.”