Butler Students Embrace the Cold for the Polar Plunge

Students and supporters raised over $53,000 for Special Olympics Indiana.

“It was colder than I thought it would be” was a phrase thrown around quite often outside the HRC on Saturday morning, February 4, where hundreds of Butler students plunged into ice-cold water.

Despite the 30-degree temperatures, students and supporters from around Indianapolis came together to participate in the Polar Plunge. 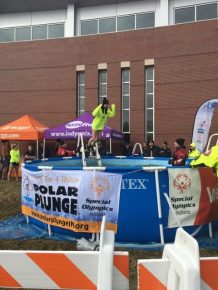 The Polar Plunge is a signature event that raises money for Special Olympics Indiana, a non-profit organization that provides sports training and competition for people with intellectual disabilities.

Ali Thompson ’20 is an experienced Polar Plunge participant whose heart is close to the cause- her brother has Down Syndrome and is a Special Olympics athlete.

Thompson says the event is an easy and fun way to get people to donate to such an important cause.

“My favorite part about the Plunge is seeing how many other people are crazy enough to do it with me,” Thompson said.

Each individual was required to raise at least $75 in pledges to participate, and together the pledges totaled over $53,000.

Mike Lesak ’20 took the plunge for the first time this year. He had his doubts about the icy temperatures, but was able to see the bigger picture in the end.

“I was definitely scared to jump in the water because I knew how could it would be,” Lesak said, “but then I looked around saw how excited some of the members from the Special Olympics organization were and I knew that this was so much bigger than myself, and an opportunity I had to take full advantage of.”