Butler Newsroom > Butler Home Page > Home Feature News > Bolin Selected to International Band Directors’ Hall of Fame
For These Students, the Sweet 16 Is That Much Sweeter Asia Is Luring Her Back, and She’s Going

Associate Professor of Music Education Daniel Bolin has been selected as the 2017 inductee to the Gamma Chapter, Phi Beta Mu Hall of Fame. Phi Beta Mu is the highest honorary fraternity for international band directors.

The award was presented at Purdue University on March 12 at the Indiana Bandmasters All State Band Concert. 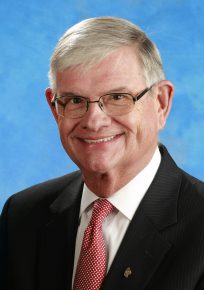 The Gamma Chapter of Phi Beta Mu was organized and the charter members initiated in 1953 at the state convention of the Indiana Music Educators Association.

Bolin joins a well-respected and dedicated group of lifelong music educators selected to the Hall of Fame. A complete list of former recipients is available at www.indianabandmasters.org under phi beta mu.

“It’s a great honor to be the fourth director from Butler to receive this recognition,” Bolin said. “I was blessed with supportive parents, wonderful mentors, and outstanding students and colleagues throughout my 47-year career. This award is all about them.”

Bolin has taught at Butler since 1995. He served as Chair of the School of Music from 1995 to 2001 and again from 2009 to 2014. He received his Bachelor of Music and Master of Music degrees from Butler and his Ed.D. from Indiana University.  Prior to his appointment at Butler, he was an administrator in the Metropolitan School District of Perry Township serving as Assistant Principal at Southport High School, Director of Secondary Education, Assistant Superintendent and Interim Superintendent.

During his career in music education Dr. Bolin served as band director at Wood High School and Manual High School in the Indianapolis. He also developed outstanding bands at Lebanon and Southport High Schools.  His bands at Southport were selected to perform for the IMEA Conference, the ASBDA National Convention, and were twice honored by Butler by performances in Clowes Hall.  In 1977 he was elected into the ASBDA and selected as the Outstanding Young Band Director for Indiana. In 1981 he co-founded the Great Lake Music Camps which served middle school and high school musicians for 23 years.

His performing background includes the Philharmonic Orchestra of Indianapolis, the Carmel Symphony Orchestra, and principal tuba with the Indianapolis Symphonic Band. He has serves as an adjudicator, clinician and guest conductor throughout the United States and for Festivals at Sea.