Butler Newsroom > Butler Home Page > Home Feature News > For These Students, the Sweet 16 Is That Much Sweeter
On to the Sweet 16! Bulldogs Beat Middle Tennessee Bolin Selected to International Band Directors’ Hall of Fame

For These Students, the Sweet 16 Is That Much Sweeter

Butler fans around the country have been rooting for the men’s basketball team this week, but three students had an extra incentive to cheer: Now that the Bulldogs have made it to the Sweet 16, juniors Alex Tison, Claire Cox, and Kaylynn Cline will be flown to Chicago to appear on a new ESPN quiz show called Bracket Genius.

The Butler team will play Kentucky, North Carolina, and UCLA on March 26 at 5:30 PM. Bonus round episodes will air Monday, March 27 at 6 p.m. and 6:30 p.m. ET. The final four teams will face off in the Bracket Genius championship episode scheduled to air on Tuesday, April 4 at 7 p.m.

The three students—and an alternate, sophomore Corrine Campbell—were chosen after winning a trivia contest and then going through a Skype audition. The producers used the audition to select students who projected personality as well as intelligence.

“To stand out in the audition, I just tried to be as personable and talkative as possible,” said Tison, a junior Finance and Marketing major from Harrisburg, Illinois. “I just thought if I could leave an impression then they would be more likely to pick me. I also tried to interact a lot with the other people interviewing.”

Bracket Genius, hosted by Trey Wingo, will pit university academic teams, consisting of three undergraduate students, against one another in a bracket-style competition for the chance to have their team crowned the inaugural Bracket Genius Champion and share the prize of $100,000. 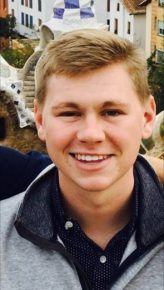 The final 16 universities represented in the NCAA tournament will match up in the same head-to-head games on Bracket Genius, where the winning team advances by answering questions spanning history, geography, politics, literature, science, pop culture, the arts, and sports in a race to score as many points as possible against the clock and their opponent.

The opening round matchups are scheduled to air Wednesday, March 22, and Sunday, March 26, at 5:00 PM and 5:30 PM Eastern Time. Each half-hour episode will feature four teams vying for the chance to advance to the Bracket Genius championship episode.

Bonus round episodes will air Monday, March 27, at 6:00 PM and 6:30 PM. These half-hour episodes, Bracket Genius: Extra Credit, will give the four championship contenders a chance to win extra cash prizes of up to $25,000 per episode.