After months of research, planning, and preparation John Boudreau, Spencer Wenzloff, and Ryan Reid made their way to Louisville to compete in the local round of the CFA Institute Research Challenge in early March. The way they decided to announce their victory? Just a short, simple email with their winning trophy picture. 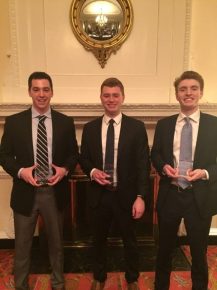 The CFA (Chartered Financial Analyst) Institute Research Challenge is an annual competition that gives students hands-on, rigorous training in financial analysis. University students work in teams and are given a company to research and analyze.

“Essentially if you were an investor, anything you would need and want to know we should be able to tell you,” Reid said.

They found out about the competition in November, when their professor, Dr. Steven Dolvin, CFA, emailed his class about interest. Right away they knew who in the class would want to do the competition. Once they sat down together, the three decided to become a team and start research right away.

“As we got closer, we looked at what needed to be worked on, and did a lot of problem solving,” Boudreau said.

Work was divided up evenly, where they each focused on specific areas. Yet, Reid said, that didn’t stop them from being especially prepared.

“Even though we each specialized in certain areas, because our team is small we needed to know absolutely everything,” he said. “We wanted to be ready so we could answer everything intelligently.”

There were two “divisions” in the local challenge, where schools were chosen at random to compete against each other. Before the competition beganeach team sent in a detailed report. One team in each division went straight to finals. Everyone else in each division competed for one other spot.

“We had a 10-minute presentation and a 10-minute Q&A session, and believe me they were incredibly strict with the cutoff,” Reid said.

The team said the time limit was the most difficult part.

“The most challenging parts of it is it is only 10 minutes,” Reid said. “Trying to consolidate hours and hours of research to what’s essential for users to understand is hard. You always feel like you need more time.” 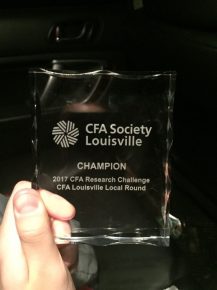 They went in and did their presentation. Boudreau said they weren’t expecting what happened next. “I was really shocked when they announced we were advancing. We had the Kelley School of Business graduate team in our division. They are much older and have had so much more experience.”

Quickly they went over everything, and in two hours sharpened what they were going to say. Apparently, they had a secret weapon.

“Spencer and I thought we had a strong concept of the company, but if you asked me what the components were that made diesel engines, it was Ryan that knew that,” Boudreau said. “That boosted our credibility by a lot. The judges even gave him the nickname Diesel.”

The final decision was announced.

“They said it was a unanimous vote, and we just looked at each other and were like, ‘Oh, wow’ because there is no way it could be us.”

When asked why they thought they did so well, they cited their communication.

“We are friends and it is what makes us work,” Reid said.

They headed to Seattle on April 7 to compete in the next level, the Americas Regional, against 52 other teams from North and South America.

Although they did not advance in the competition, they were excited to participate.

“I want to pursue things that are more like this,” he said.