Brett McNeal ’08 Gets a Dose of Reality

The court of public opinion is about to get tested by a new TV show, and a couple of Butler alumni will be part of the proceedings.

Brett McNeal ’08 and his fiancé Darvin Lewis will appear on the April 21 episode of You the Jury as plaintiffs in a case pitting them against the owner of a northern Indiana pizza restaurant who refused to serve gay patrons. Their friend Amanda DiMaio Livarchik ’08 will be a witness for their side. 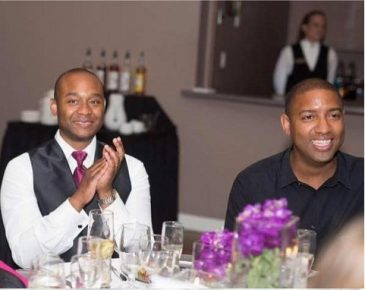 Brett McNeal ’08 and Darvin Lewis will be on the new Fox series “You the Jury.”

“Brett and I always joked over the years that our lives would make for great reality TV,” Livarchik said. “Little did we know we would one day end up on Fox.”

Fox News personality and former daytime judge Jeanine Pirro is host of the show, which features real civil court cases being argued by recognizable attorneys, with viewers voting on the verdict live as the show airs. Each episode focuses on a case concerning a current hot-button issue, such as online trolling, the limits of free speech, and the constitutional clash of gay rights with religious freedom.

“The experience was totally and utterly surreal,” McNeal said. “When we had intermission, we were escorted back to the dressing room and I just had to lay on the couch, asking myself, ‘What did we sign up for?’ But I always kept in the back of my mind that we were fighting for a cause.”

McNeal and Lewis said they were chosen because “they wanted to cast a nice, loving, gay couple in Indiana going against the guy from up north.”

The crew came into town early March 2016 and “took over our house,” Lewis said. “They interviewed our friends and family. Then we were informed that we would be going to L.A. for the final taping. In the beginning, we didn’t think it would be more than a People’s Court kind of thing. However, the more we spoke to the producers, the bigger it got. Suddenly, we were told that there would be a live audience.”

McNeal, who works in renewals for a local company, said he and Lewis will be watching the outcome at a public viewing party at Tini, a martini bar on Massachusetts Avenue in Indianapolis.

“We are contractually obligated not to publicly discuss the details of the episode until it has been announced,” McNeal said. “But we hope to drum up support for both the big vote on the episode and the ongoing LGBT cause.”