Butler Bowl to be Renamed in Honor of Bud and Jackie Sellick.

INDIANAPOLIS – Winstan R. “Bud” Sellick ’47 and his wife, Jacqueline (Blomberg) ’44, had a longstanding love for Butler University, and that affection will continue in perpetuity, thanks to a gift of $9.4 million from their estate. The gift will be shared among Butler Athletics, the Lacy School of Business, and general University support. 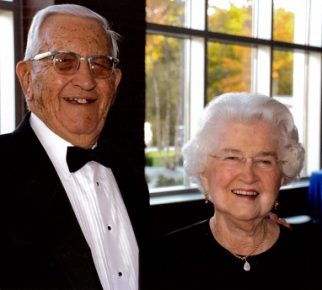 The Sellicks had asked longtime friends Dan Yates and Bob Wildman to assist in the transfer of this gift to Butler. Wildman noted that the Sellicks “were special people with a special place in their hearts for Butler.”

They also made gifts to the Butler Fund and several athletic funds, including the restoration of Hinkle Fieldhouse. In 2007, Bud and Jackie Sellick received the Ovid Butler Society Mortarboard Award. In 2014, Bud also was honored when he received the Butler Medal. He also was a donor and strong supporter of Delta Tau Delta Fraternity.

Butler President James M. Danko said the University deeply appreciates the gift and the Sellicks’ devotion to Butler. “The Sellicks had a tremendous concern for the well-being of future generations of Butler students,” he said. “This generous gift will ensure Bud and Jackie’s wonderful legacy—that current and future Bulldogs will have access to the same great education and campus experiences that they enjoyed.”