Kelsey McDougall, John Anderton, Taylor Pearson, and Viki Tomanov’s projects were judged to be the best among the 21 students from five different universities who submitted their completed papers for competitive review. 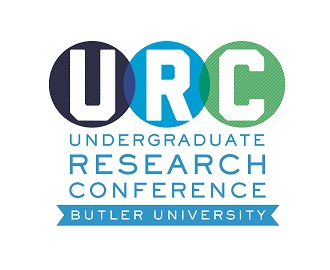 Pearson, a senior Criminology/Psychology/Spanish major from Indianapolis, wrote Selective Sexualization and Censorship: Freeing the Nipple and Challenging the Male Gaze.

The abstracts for the four papers are below.

To evaluate the papers, all identifying features of the authors were removed. The papers were then sent to faculty across the nation who volunteered to serve as reviewers and were selected because of their ability to conduct interdisciplinary research.

Of the 21 students who submitted, 11 were Butler students.

The abstracts for the four papers:

Strength in Numbers: How the NBA Dunk Contest Reifies Hegemonic Masculinity for its Audience

Televised basketball is a worthy area of study that communicates specific values and messages to the audience watching both at home and at the events. The NBA dunk contests have been held for more than four decades and are worthy of analysis with relation to the field of gender studies. Each competition is based around the idea of performing different types of dunks, which are then judged officially by judges at the event and unofficially by the announcers on the television. Based on those scores, a champion is chosen from all the dunkers involved. I apply Trujillo’s five characteristics of hegemonic masculinity (physical force and control, occupational achievement, familial patriarchy, frontiersmanship, and heterosexuality), Fiske’s characteristics of the masculine hero narrative, and Messner, Dunbar, & Hunt’s Televised Sports Manhood Formula. I contend that the NBA dunk contests reify masculinity through the presenters’ comments as well as video images of both the players and the fans reacting to the event. Analysis of the events shows that features from each idea regarding masculinity are used extensively by the television crews to elevate players who uphold the ideals of masculinity so that viewers can observe and aspire to be like each champion. When the format of the event changes to feature a non-masculine characteristic, the announcers struggle to elevate a champion and inspire the viewers to see what each athlete can do. The results of the analysis show that the construction of the NBA dunk contests by the television corporations as a winner-take-all event lead to the reification of masculinity.

Selective Sexualization and Censorship: Freeing the Nipple and Challenging the Male Gaze.

I analyze the #FreeTheNipple movement, which gained popularity as a collective response to social media platform guidelines specifically banning photos of female nipples, but not male nipples. Using hegemonic masculinity, sociological structuralism, and communications and linguistic theories as analytical lenses, I determine that this trend is only a feminist movement in that it is intended to benefit women, but is ultimately too exclusionary and hegemonic to be considered liberating. Specific photos shared under #FreeTheNipple are discussed, implications are explained, and suggestions for improvement of the campaign are offered.

Fraternity members constitute a large percentage of leading working professionals in highly influential jobs. Fraternity men usually spend the majority of their undergraduate college experience in a single-gender community (i.e., their fraternity house), thus, it becomes essential that masculinity be at the forefront of examination when acknowledging the great societal impact of fraternities during and after college. Tau Kappa Epsilon (TKE), the fraternity with the largest amount of chapters nationwide as of 2016, is the focus of my analysis. Its popularity among college campuses signifies that its recruitment is successful and that, regardless of initiation into the fraternity, many men (and women) view TKE as an example of masculinity. In my analysis, I focus on TKE recruitment videos from various universities that span the Northeastern, Southern, Midwestern, and Western regions of the United States. My analysis is divided amongst five markers that indicate an abidance to hegemonic masculinity, or the varying construction of the “ideal” man that is impossible to fully achieve. These markers of hegemonic masculinity are: Dominance (ascendency), sexual objectification of women, heteronormativity, alcohol use, and recreational movement of the body. I use these markers to demonstrate how TKE’s sustainment of hegemonic masculine ideals is problematic to society as a whole given the influence of fraternities beyond campus borders.