At the URC, a Bicycle Made of Hemp

If Christopher Jones has his way, you’ll soon be able to ride a bicycle made of hemp.

Jones, a fifth-year senior in Butler’s Engineering Dual Degree Program (EDDP), and his classmate Gunabhushan Sathyamurthy presented their idea Friday, April 7, at the 29th annual Undergraduate Research Conference, which brings some of the best and brightest undergraduate minds to campus to show off their research projects. 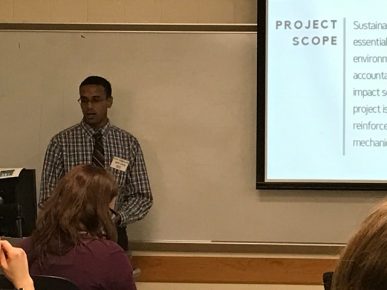 Jones said the idea for the hemp frame came in a class where the professor challenged the students to devise something ecologically friendly.

“Hemp is something everyone knows about already,” Sathyamurthy said. “It’s already being used as textiles and it’s very cheap and easy to obtain. We wanted to find something within our budget but at the same time, it’s sustainable and natural.”

“We could use jute or kenaf or something like that,” Jones said. “But you don’t know what that is.”

They took layers of hemp, combined them with resin, and molded them to form tubes. At the conference, they passed around pieces of tubing made with three sheets of hemp. They said the final version is more likely to be five to seven pieces of hemp, which will make it sturdier.

Jones and Sathyamurthy’s team, which also includes EDDP students Madeline Schmitz, Matthew Beebe, Matthew Tosino, and Greg Cerabona, hopes to have a prototype frame finished by the end of the month.

They presented at one of the conference’s biology sessions because they want to find a biology student—ideally a rising sophomore—to do the secondary research on what others have done to strengthen natural fibers.

Jones said his dream is to eventually have a business built around what he calls “the Rebicycle.”

“We only making the frame,” he said. “You bring us your old bike and we’ll build you a new frame and we’ll use the parts from your old bike. Then we’ll recycle the old frame.”

All over campus on Friday, more than 700 students from 58 colleges and universities in 12 states showed their research in subjects ranging alphabetically from anthropology to sustainability. In addition, Butler sponsored students from two local high schools, Shortridge and Lawrence, as a way to support research from an earlier age.

Maria Rechtin, who’s finishing her junior year at Thomas More College in Kentucky, represented a group of 10 students who have been working on research into the effects of nicotine on urinary bladder cancer cell lines at the Wood Hudson Cancer Research Laboratory. The students involved in the research represented seven schools, including the universities of Louisville, Dayton, and Ohio.

Rechtin said the research is ongoing, but she wanted the opportunity to present what they had accomplished so far.

“Students from Thomas More College present here every year,” she said. “I had research to present and I wanted to present it. It’s a tradition at our school.”