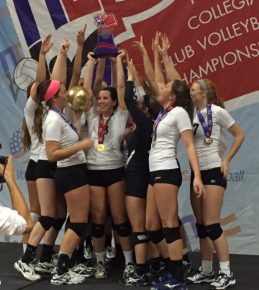 The tournament, which took place April 12-15, attracted over 440 NCVF collegiate club teams from throughout the country. The tournament featured 10 divisions of competition, with 1,683 individual matches played on 63 courts over a three-day span at the Kansas City Convention Center.

The entire tournament we worked incredibly as a team. We didn’t let teams string points together very often, and our confidence in ourselves was never shaken. Though we were in Division 2, the competition was still extremely tough. All of the other teams in the gold bracket on the last day have players on both the first and second All-Tournament Teams.

Western Washington, Wake Forest, UM Duluth, and UW LaCrosse specifically were our toughest games, but most of the time we were able to come out on top. (During our regular season we play mostly Division 1 teams like IU, Purdue, Ball State, Dayton, Cincinnati, etc. But the teams in Division 2 work just as hard and are just as talented.)

We also have five freshmen on our nationals roster, and 10 on our regular season roster. So our team this year was very young and very new. They all worked very hard during the year, and I’m excited to see where they’ll take the team.

As for the upperclassmen (those who are first-years), each one of them is extremely integral to the team and a leader on and off the court. Suzie Smith runs our defense and serve receive and leads by example; Anna Taylor is one of the most vocal on the court and keeps us competitive; Kennedy Flesner is one of the hardest workers, if not the hardest worker, and leads with humor and positivity; Sam Lilly is the most caring, always trying to bring our team together; Lindsay Rhodes and Ashley Eimers somehow always get kills when we need them the most and are always ready to do whatever they need to do on the court to keep us in the game.

Honestly, we’ve never played together like we did at this national tournament. It was an amazing and unforgettable way for us (and for me as a senior) to go out. 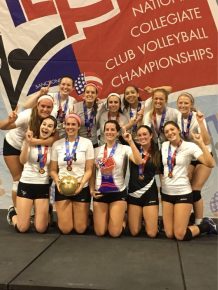