The BIG EAST and Big Ten Conferences have announced the matchups for the third annual Gavitt Tipoff Games, with eight men’s basketball contests set for Nov. 13-17, 2017. Butler will travel to Maryland on Wednesday, Nov. 15, in a match-up of 2017 NCAA Tournament teams. The game will air on FS1 or the Big Ten Network. 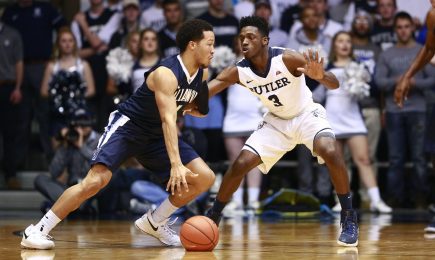 Game times will be announced at a later date.

The unique series between the two conferences is named to honor the late Dave Gavitt, who founded the BIG EAST and had a profound and lasting influence on the sport of basketball on the collegiate, professional and Olympic levels. He was inducted into the Naismith Memorial Basketball Hall of Fame in 2006.

“This is an outstanding event in honor of the late Dave Gavitt and we’re excited to be part of it,” said Butler coach Chris Holtmann. “These are two of the best conferences in college basketball and provides us with another great opportunity to compete on a national stage.”

Butler and Maryland have only met once previously, a 62-59 Butler win in the second round of the 2007 NCAA Tournament.

Maryland made an appearance in the 2017 NCAA Tournament, falling to BIG EAST foe Xavier in the first round. Mark Turgeon’s team advanced to the Sweet 16 of the 2016 tournament. The Terrapins posted a 24-9 mark during the 2016-17 season, including a 12-6 Big Ten record. Maryland returns four of its top five scorers from a season ago (No. 2 scorer Justin Jackson has declared for the NBA Draft but has not hired an agent). The Terrapins’ recruiting class features a pair of Top 75 players in addition to Duke graduate transfer Sean Obi.

The annual Gavitt Tipoff Games feature battles between local foes and attractive intersectional matchups. Among the 16 participating schools, 11 played in the NCAA Tournament last year and two played in the NIT. Five of the games will feature match-ups of teams coming off NCAA berths. The 11 NCAA teams are: Minnesota, Providence, Purdue, Marquette, Butler, Maryland, Creighton, Northwestern, Seton Hall, Xavier and Wisconsin.  The two NIT squads are Indiana and Illinois.

Scheduled through 2022, the Gavitt Tipoff Games will be played on consecutive days in the first full week of the college basketball season. The series will span eight years, with games played at home sites. Each BIG EAST team will participate a minimum of six times, while Big Ten programs will take part a minimum of four times. Teams from both conferences already meet in some traditional rivalry games, and those matchups will continue in the upcoming seasons.

Butler did not participate in the inaugural event in 2015. The Bulldogs then defeated Northwestern at Hinkle Fieldhouse in 2016.

Butler finished the 2016-17 season with a 25-9 record under head coach Chris Holtmann, advancing to the sixth Sweet 16 in program history. The Bulldogs earned their highest NCAA Tournament seed in program history on the heels of a second-place finish in the BIG EAST standings. Leading scorer and All-BIG EAST selection Kelan Martin returns alongside starters Tyler Wideman and Kamar Baldwin. That talented trio will join an experienced group of returners and the highest-ranked recruiting class in program history.

Butler at Maryland – FS1 or BTN

Creighton at Northwestern – FS1 or BTN