Set your sights high and strive for excellence, treat others the way you would like to be treated, and think and act independently, retired Eli Lilly & Co. CEO John Lechleiter told the Butler University Class of 2017 at Hinkle Fieldhouse on Saturday, May 6. 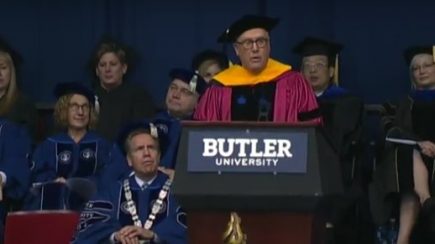 Lechleiter, who received an honorary doctorate, as did his wife, Sarah, told the 955 graduates, their families, and friends, that as an undergraduate, he had an Adjunct Professor of Chemistry recommend that he go to Harvard for graduate school.

Lechleiter’s reaction: “Are you kidding me?”

He also recommended giving others the benefit of the doubt, avoiding gossip, and reveling in the success of others. And, he said, the graduates should muster the courage to think for themselves.

Lechleiter recalled a time at Lilly when the company was about to lose 40 percent of its revenues from four drugs with expiring patents. He said he received a lot of advice—none of which he took. Instead, despite skepticism, Lilly increased spending on research and development, which “was the right thing to do, and it has since be vindicated.”

“You spent years here at this great university, learning how to think,” Lechleiter said. “Take advantage of that.”

The Class of 2017 included 811 undergraduates and 144 graduate students. Of those, 267 studied abroad at some point in their Butler career.

Theatre Department Chair Diane Timmerman gave the faculty address, in which she advised students to trust their own voice. She told the graduates that:

-Nothing is ever convenient, so don’t sit and wait for perfect circumstances before trying things.

-Say yes to as many things as you can.

-Everyone is scared. Timmerman said she’s been scared at every major moment of her life, but those have often turned out to be the greatest moments of her life.

To illustrate her point, she reminded the graduates about the scene in the movie “Hoosiers” in which Gene Hackman walked his awestruck team into Hinkle Fieldhouse for the state championship basketball game and used a tape measure to show the players that the basket and foul line are the same height and length as they are on their home court.

“My wish for you, beautiful Class of 2017,” she said, “is that you find a helpful tape measure whenever you need it.”