During the summer in between her junior and senior years at Indiana University, Laurie Pylitt, discovered her future career in the most unlikely place—Seventeen magazine. 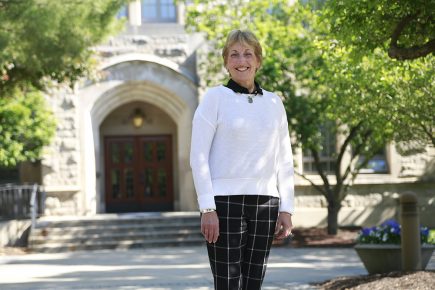 It was the 1970s, at the height of many women’s rights movements. Pylitt, who was working in a physical therapy department, remembers finding the article, “15 Health Careers for Women,” and thinking how chauvinistic it sounded for the time. After reading it though, she learned about the Physician Assistant (PA) career field for the first time and thought that might be the right choice for her.

In 1976, Pylitt graduated from IU with a Physician Assistant certificate. She balanced full-time employment as a surgical PA in Chicago—a position she held for 15 years—while earning a Master of Health Professions Education from the University of Illinois.

In 1991, Pylitt moved back to her home state of Indiana when she married her husband, Bernard, whom most refer to as “Buddy,” and took a position at Methodist Hospital, now named Indiana University Health Methodist, as the Manager of Quality Assurance.

Her lifelong dream was to start a PA program, and when she was approached to do that at Butler, she said, “It was like a dream come true.”

“Butler and IU Health Methodist combined gave me the opportunity to do something I’ve wanted to do since I was a student,” Pylitt added.

Pylitt, in collaboration with Professor Emeritus Bruce Clayton, co-authored the proposal that started the Butler PA Program, and she served as its founding Program Director from 1994–1998.

“When I came to Butler to start the PA program, there hadn’t been a PA program in Indiana for 20 years,” Pylitt said. One of her goals “was to reintroduce the PA profession to the state.”

It has been 20 years since the first class graduated from Butler, and more than 750 PAs have finished since then. Pylitt takes pride in the fact that several current PA faculty are graduates of the program she was instrumental in starting.

One such student is Assistant Professor Matt Stinson, who is a graduate of the first PA class. He remembers there being much uncertainty during the creation of the program because it wasn’t accredited. And with no accreditation, the nine students in the program would be unable to start their career.

“Laurie was a trailblazer in starting the new PA program, and she worked hard,” Stinson said. “She was able to get the program accredited, I graduated, became a PA for 20 years, and was able to come back here to teach. I’m very appreciative of all the hard work Laurie put into the program.”

After a brief hiatus from Butler to work with the Indiana University School of Medicine’s Family Medicine Residency, Pylitt returned to Butler in 2007. She has served in multiple teaching roles: as part of the team teaching clinical assessment for Pharmacy students; as the Course Director for Pharmacy Therapeutics and Case Studies; and as the Co-Course Director for Therapeutics for PAs.

In 2010, she became the COPHS Director of Assessment. The next year, she was instrumental in the re-accreditation process for the Pharmacy program.

Associate Dean for the College of Pharmacy and Health Sciences Bonnie Brown said Pylitt has been a key player in many areas of the college. Perhaps her largest impact has been with assessment.

“She was all about assessments,” Brown said. “She was always willing to talk to students about assessments, making sure they understood the importance of course instructor evaluations and how that feeds into a system of how we make improvements for the next year. If a student group sees that their comments have been useful to change something for the better for the future, it does make them more aware of how they can provide feedback for change.”

Pylitt described her impact this way: The word “assessment” is no longer a negative word among faculty, staff, and students. Brown agreed.

Moving forward, Pylitt is unsure what retirement will bring. She said that since her mid-20s her career has been her identity, and it will be a large adjustment come retirement.

Despite the change, she’s looking forward to traveling more, cooking, listening to audiobooks—which she recently discovered and really enjoys—and working in her 40-foot-by-40-foot garden.

“I’ll continue to learn,” she said. “I like learning new things, or new ways to do old things.”