For almost 25 years, Dick McGowan taught Butler students—mostly in the Lacy School of Business, and mostly about ethics. But the underlying lesson in everything he taught them was about hope. 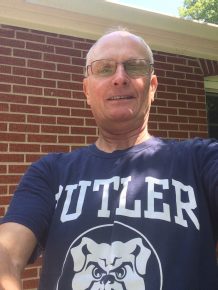 McGowan would tell his classes about how, as an undergraduate at Colgate University, he had been unprepared to leave home and not ready for the academic rigors of college. In his first three philosophy courses, he got a C-plus, a D, and a C.

“I made sure my students knew that,” he said, “because I wanted them to understand redemption. What happens can be overcome. There’s hope. I want to teach hope. I think professors have to teach hope. If they don’t, they’re not doing their entire job. What I like to say is, ‘George W. Bush is not the only C student who did something with his life.’”

And now that McGowan has retired—2016–2017 was his final year—he looks back proudly at what he achieved.

McGowan grew up on the north shore of Long Island, New York. His father was an athletic director working with disadvantaged kids; his mother stayed home to raise eight children.

After graduating from Colgate in 1971, McGowan moved back to Long Island and became a field supervisor, overseeing the construction of about 80 houses. He guesses he would have been a multimillionaire if he’d stuck with that profession.

“But it didn’t suit my nature,” he said. “I had a boss who wanted us to skimp. But if you don’t follow the contract, that’s a mistake. It’s a moral shortcoming.”

Instead, he moved out to Washington state, where he worked as a bartender, forklift operator, hot-tar roofer—anything to support his habit. The habit of learning. He finished his master’s at Washington State University in 1976.

From there, McGowan went to Marquette University, where he worked as a teaching assistant and earned his doctorate in Philosophy in 1985. He also met and married his wife, Barbara, a research scientist, and they began a family that grew to three sons, all now adults.

After graduation, he found himself teaching at the Milwaukee School of Engineering, “which had very little use for ethics,” he said. His wife’s job was going to lose funding, so they started to look for work elsewhere. McGowan landed a position at St. Joseph’s College in Rensselaer, Indiana, as an associate professor and director of the school-wide required ethics course.

Rensselaer was great for him, but not so much for Barbara, who was underemployed and unhappy. He decided to “commit career suicide” and follow her to Indianapolis. She worked, and he stayed home with the boys. In 1993, Butler hired him for a part-time position teaching business ethics.

“Doc has inspired me to do the impossible,” said Nyree Modisette ’19, a political science major. “I never thought I could publish any of my work; however, Doc changed that for me. He helped me publish my essay titled ‘Framing the News; Dividing the Country,’ which has been published in the Kokomo Tribune, USA Today, The Commercial Appeal, Burlington Free Press, and other places. He saw something in me that I did not see. Doc deserves to be celebrated and recognized for all the great work he has done for all of his students.”

Connor Brooks ’18, a finance major, said McGowan encouraged and sponsored him to present a paper during the Butler Undergraduate Research Conference last spring. He described McGowan as “a friend, mentor, and professor—in that order.”

“Doc made a personal connection with me and from the beginning has encouraged and challenged me to pursue my passion,” Brooks said. “He sees the good in people and encourages students to be better people in the classroom, on campus and in society as a whole. I am grateful for professors like Doc who encourage and support students both in and outside the classroom.”

Around Butler, McGowan became known for a number of disparate characteristics. He rode his bicycle to work most days, a commute of about 16 miles round trip. He paints tiny pictures that he gave to people as gifts. He kept espresso candies in his desk that he shared with anyone who needed a little burst of energy.

Associate Professor Hilary Buttrick, who is taking over the ethics classes McGowan taught, remembers getting one of those candies when she came to Butler to interview for her faculty position. She met McGowan at the end of that day.

“I think he could tell that I was exhausted, stressed,” she said. “He sat down and looked at me and said, ‘What kind of books are you reading right now?’ So we spent most of our interview time talking about books that we’d read, books that we want to read. So I will always think of Dick as somebody who has tremendous compassion for the people he’s working with and he encounters, and compassion for his students.”

McGowan counts among his proudest achievements helping Fraser Thompson ’01 became Butler’s first and only Rhodes Scholar (“One of the cleanest, clearest writers I’ve ever had”) and helping the women’s lacrosse club get off the ground.

“I thought it was important for women to run around and hit each other with sticks, consistent with Title IX,” he said with a smile.

In retirement, McGowan plans to continue painting, reading, writing, thinking, traveling, and riding. He said if he has any regrets, it’s that he didn’t pursue baseball after high school. He was a pitcher in high school, he wishes he had seen how far he could have gone.

He loves baseball, roots for the Milwaukee Brewers and the Atlanta Braves, and for years led a quixotic campaign to get pitcher Virgil Trucks into the Baseball Hall of Fame. Trucks, who pitched two no-hitters in one season (1952), and McGowan ultimately became friends.

Hank Aaron, the great home run hitter, was one of McGowan’s idols.

“He was what I wanted to be,” McGowan said. “But being a philosophy professor wasn’t bad.”