Butler Welcomes the Class of 2021

This year, 14,638 prospective students applied to Butler, a 13 percent increase compared with 2016. In the last two years, the University has seen more than 40 percent growth in first-year applications for admission. 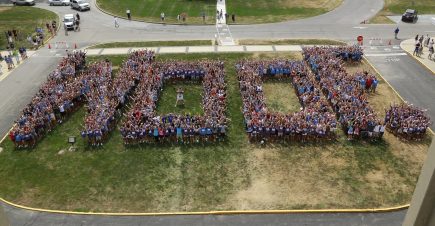 Butler’s Class of 2021 continues the University’s track record of attracting high-quality, academically prepared students. Here’s a look at some numbers.

The Class of 2021 comes from 35 states and five countries. 43 percent are from Indiana, and 57 percent are from out of state. Fifteen percent of the class is from the Chicagoland area. This year’s class shows significant growth in new students from the Mid-Atlantic region (42), double the number from last year’s class.

Austin Valleskey (Hoffman Estates, Illinois) – Developed Impossible Rush, a game intended to improve cognitive skills, which has over 1 million downloads on iTunes to date and was featured on NBC, WGN, Forbes, Business Insider, and the Huffington Post.

Isabella Ruscheinski (Peoria, Illinois) – At 15, started her own cupcake/catering business, which she still runs.

Tamalynn OGrady (Dexter, Michigan) – Disheartened by the rising costs associated with the arts, she founded a community service organization aimed at providing free music education to those who may otherwise not have the means. She gave free cello lessons seven days a week during the summer of 2016.

Ethan King (West Olive, Michigan) – When he was 10, he founded Charity Ball, which has raised money to hand-deliver thousands of soccer balls and clean drinking water to kids in impoverished areas all over the world.

The University will also welcome 80 new transfer students to campus this fall, including one Lilly Scholar.