Honorees to receive their recognition during Homecoming Weekend.

Butler University will hold the annual Alumni Awards Recognition Program for extraordinary professional achievement and service to the University and their communities on Friday, October 20, at 6:00 PM in the Howard L. Schrott Center for the Arts.

Registration for the awards ceremony and all Homecoming activities can be made online at butler.edu/homecoming. More about the recipients and their awards follows. 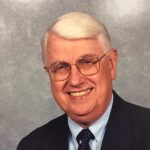 Norman W. Wilkens, President, Wilkens Consulting LLC, has been active in marketing, advertising, education, and public relations in Indianapolis for over sixty years. A 1957 graduate of Butler University with a Bachelor of Science in Radio and Television, Wilkens began his career as an announcer and floor director/writer at WTTV (Channel 4). He joined WXLW radio as Continuity Director in 1958. Four years later, he joined Ruben Advertising in its Public Relations Division.

The next steps of his career included advertising and marketing in leading Indianapolis firms including Handley & Miller and Caldwell, Larkin, Sidener, and Van Riper. At that juncture, he and others formed McQuade, Wilkens, Bloomhorst Advertising.

Wilkens became a principal in Carlson & Co. Advertising as President/CEO. Seven years later, he merged the agency into Montgomery, Zuckerman & Davis (MZD) as Vice President and Account Supervisor. He left MZD to form an in­house agency for Standard Management Corporation, an international insurance holding company, in 1993.

In 1996, he spun the agency out of its in-house status and it became an independent firm under the banner Advertising Visions Inc. Five years later, the name was changed to Ambient Communications. In 2004, he dissolved the agency to serve as an independent marketing consultant emphasizing health care. Today, that entity is known as Wilkens Consulting LLC.

Wilkens has held teaching posts at Butler University (for 21 years), Indiana University, and Indiana Wesleyan University, as an instructor in broadcast writing, advertising, and public relations. His father, Dr. Irvin Wilkens, received his pre-medical degree from the old Butler Campus in lrvington. 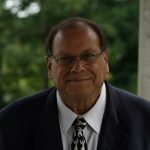 Dr. Robert Grechesky is Emeritus Professor of Music and Director of Bands at Butler University. He taught conducting, music education courses, wind band history and literature, and euphonium, and he conducted the Butler Symphonic Band and Wind Ensemble on four European tours. In 2014, he retired from active teaching after 41 years of service at Butler.

He was named a Sagamore of the Wabash, the highest civilian award that the State of Indiana gives, by Governor Mike Pence, and in 2016 he was honored by his election to the Butler University Athletic Hall of Fame. He is the recipient of the A. Frank Martin Award, a national award given by Kappa Kappa Psi for outstanding service to college bands. Grechesky was named 2010 “Outstanding University Music Educator” by the Indiana Music Educators Association. He was selected as the 2010–2011 recipient of the James B. Calvert Lifetime Achievement Award by the Indiana Wind Symphony, and was named Outstanding Professor by the Butler Mortar Board.

He will be awarded the Butler Service Medal, which recognizes emeriti faculty or retired faculty and staff (alumnus or non-alumnus) for a lifetime of distinguished service to Butler University and to the community. 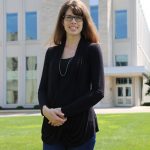 Becky Ruby-Wojtowicz graduated with a Bachelor of Science in Arts Administration and a Bachelor of Arts in Journalism (Public Relations).

After two years as Individual Giving Manager at the Indianapolis Zoo, and two years in a similar position at Wishard Health Foundation, she left to run lilly lane, a company she started in January 2008 to provide flowers, event-planning, and other services. (Her first client was a Butler alumnus.) lilly lane has now provided wedding flowers to over 600 couples, as well as corporate and non-profit clients.

Ruby-Wojtowicz was a four-year member of the Young Alumni Board, including one year as vice president and one as president, and has taught at Butler in the Arts Administration program.

She and her husband, Justin, have a daughter, Claire.

The award she is receiving is named for Joseph Irwin Sweeney, whose student career was cut short when he suffered an untimely death in summer 1900, prior to his senior year. It goes to a graduate who completed their degree within the past 15 years who has contributed significant service to the University. 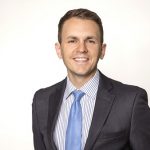 Dr. Michael Hole is a pediatrician and social entrepreneur who started his career as a case manager focused on child trafficking before founding two international development campaigns: Power of Children, which started a primary school for 350 students in post-conflict Uganda, and BeHaiti, which helped Partners in Health develop and distribute a vitamin-enriched food treating 50,000 malnourished youth yearly and support an orphanage for 64 disabled, abused, or homeless children abandoned during Haiti’s 2010 earthquake.

In 2016, he co-launched StreetCred, an organization at the intersection of government and health systems helping low-income families build assets while they wait in pediatric clinics and hospitals. Featured by The Boston Globe and CBS News, StreetCred has returned more than $1.5 million in tax refunds to vulnerable families, which placed Hole on Forbes Magazine‘s 30 Under 30 list of social entrepreneurs. 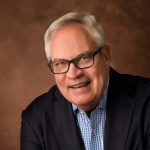 Kevin McDevitt, Senior Vice President-Wealth Management for UBS Financial Services Inc., graduated from Butler University with a degree in mathematics and went on to earn his MBA in finance from the University of Detroit. He is a Certified Financial Planner and is a member of the Investment Management Consulting Association. He is a member of UBS’s distinguished Director’s Club, which recognizes the top Financial Advisors in the firm. McDevitt has worked for UBS for 30 years.

McDevitt is the current President and a founding member of the Butler University Detroit Alumni Chapter and has been a member of the Ovid Butler Society for the past five years. He also was a supporter of the Campaign for Hinkle Fieldhouse.

In the Detroit community, he has served as a former Introduction Leader of Landmark Education, past President of Marian Athletic Club, and member of the Finance Committee at St. Ireneaus Church.

McDevitt was a four-year letter-winner as a running back on Butler’s football teams, 1973–1976. He led the NCAA (all divisions) in kickoff returns in 1975, and he still holds Butler’s career record for kickoff returns. He won the conference scoring title in 1974, and he became the first Butler football player to score 100 points in a season in 1976. In 2003, he was inducted into the Butler Athletic Hall of Fame.

He and his beloved late wife, Kathy ’78, met at Butler. They have four children, including daughter Shannon, who is a senior at Butler this fall. Shannon is a Health Science and Business major and is a member of the Butler’s Women’s Soccer Team. In 2016, she was named to the All-BIG EAST Conference Second Team.

He is receiving the Katharine Merrill Graydon Alumni Service Award, which is presented to a graduate who received their degree more than 15 years prior to the presentation of the award in recognition of outstanding service to Butler University. 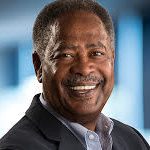 As Senior Vice President and Chief Financial Officer for Roche Diagnostics Corp.—a position he has held since 1996—Wayne Burris uses his strong background in U.S. and international accounting and finance experience dealing with business and reporting issues to provide strategic and tactical advice for the many Roche businesses.

He was a founding member of the Roche Diagnostics-North American STAR initiative that generated over $100 million in purchasing savings and has since become a global initiative, and he served on the Diagnostics Investment Committee tasked with deciding how to allocate and approve over $500 million in annual capital investments.

Prior to his current position, Burris was Head of Global Finance for Patient Care and, before that, was Vice President of Finance. Before joining Roche Diagnostics in 1986, he was Senior Manager for Price Waterhouse LLP, focusing on clients in the financial service industry and on global healthcare manufacturers in diagnostics, orthopedics, and pharmaceuticals.

Burris, a Certified Public Accountant, is a native of Indianapolis. He received his Bachelor of Science degree in Accounting and Finance from Butler University, where he was voted one of the Top Ten Male Students and was named the Outstanding Male Student of his graduating class. He was a recipient of an Ernst & Young scholarship in accounting, and in 2002, he was inducted into the Butler University Athletic Hall of Fame.

He is being honored with the Robert Todd Duncan Alumni Achievement Award, which is presented to a Butler graduate who received their degree more than 15 years prior to the presentation of the award in recognition of outstanding contributions in a career field or to society. 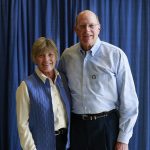 Karen and John, “Bud,” Colglazier have been Ovid Butler Society members since 2002. Karen joined the OBS Executive Committee in 2008 and served as the chairperson for three years. She also served on the Butler Parent-Faculty Council (2002–2003) and in the fall of 2005 joined the Board of Visitors for the College of Liberal Arts and Sciences, which she is still a member of today.

Karen, an Indianapolis native, spent her childhood playing in the sand under the bleachers and running the ramps of Hinkle Fieldhouse, rolling down the grassy hill onto the football field, and sledding behind the Butler Bowl. Her father, Bob Dietz ’41, was an All-American basketball player at Butler and long-time assistant Men’s Basketball coach to Tony Hinkle from 1947–1970. Karen attended Butler for her undergraduate and graduate degrees, receiving her Bachelor of Arts in History/Political Science and her Master of Arts in American History.

In the summer of 1974 she was awarded a Fulbright Fellowship for study and travel in India, an achievement she credits to the rigorous curriculum of the College of Liberal Arts and Sciences. Karen taught social studies in Indianapolis Public Schools and Hamilton Southeastern High School, and was a Title IX girl’s tennis coach, being a part of the first high school girls’ tennis program in IPS in 1971.

Bud is owner and President of Don Hinds Ford in Fishers, Indiana. He is a 1967 graduate of Indiana University Kelley School of Business and a member of Sigma Chi Fraternity.

The Colglaziers are the parents of three children—sons John and Mark and daughter Carrie. John and Mark are part of the management team at Don Hinds Ford. Carrie, a member of the Butler Women’s Soccer team studying in the pre-PA program, was killed by a drunk driver June 6, 2003. In 2006, Bud and Karen established an endowed scholarship in Carrie’s memory to benefit a Butler Women’s Soccer player who best exemplifies the Butler Way.

The Mortar Award, created in 1995, honors one person or couple each year who personifies the Butler spirit by demonstrating great vision, leadership, and generosity to Butler University. 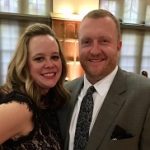 Branden and Jenn Renner were one of the first pledges to the new Butler Andre B. Lacy School of Business building, and their contribution will result in a conference room being named for them.

Brandon, who played football for Butler, graduated in 2002 with a Bachelor of Science in Finance. He is now Associate Vice President, Investments & Financial Advisor for Renner Masariu Wealth Management of Raymond James—one of the youngest vice presidents in Raymond James’ 50-year history. He has also been a consecutive five-year winner of the Achiever’s Club Award and has been nominated as one of Five Star Professional’s Top Wealth Advisors in Indianapolis.

In addition, he has won the Joseph Irwin Sweeney Alumni Service Award and the Barbara Busche OBS Award, and was the Rotary Foundation’s Paul Harris Fellow.

Jenn graduated from Purdue University in 2005 with a Bachelor of Arts in Education. She was an Avon Community School Corporation elementary-school teacher and is now a stay-at-home mom with sons Luke and Logan. She works as a Beachbody coach and is active with the Make-A-Wish Foundation.

The Foundation Award, created in 2011, honors one person or couple (age 40 and younger) each year who personifies the Butler spirit by demonstrating leadership and generosity to Butler University.