Howard Caldwell ’50, MA ’68, whose distinguished career at WRTV (Channel 6) in Indianapolis earned him induction into the Indiana Journalism Hall of Fame and Indiana Broadcasters Hall of Fame, died Monday. He was 92. 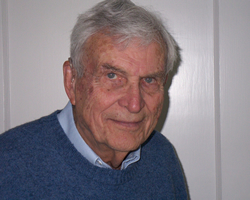 He had lifelong ties to Butler. His parents, Howard ’15 and Elsie ’17, and his sister Virginia Caldwell ’40 all were Butler alumni, as is his daughter Tracy Reidy ’80, MS ’84. His wife of 62 years, Lynn, has served on the Clowes Women’s Committee.

Caldwell served in the Navy during World War II and the Korean War. After graduating from Butler, he was a News Manager with WTHI radio in Terre Haute, Indiana. He joined WRTV (then called WFBM) in 1959 as a reporter and spent 35 years at the station, retiring as Senior Anchor. He was named the 1978 Newsman of the Year by the Indianapolis Press Club, a first for a television reporter. He was the first American reporter to interview the newly elected Indian Premier Indira Gandhi, and his documentary on hunger in India earned him several honors.

He was inducted into the Indianapolis Public Schools Hall of Fame in 2008. That same year, he received an Indiana Lifetime Achievement Award, one of the state’s highest awards given to any individual who demonstrates outstanding devotion to Indiana. He received the Hilton U. Brown Award for Lifetime Achievement from the Irvington Historical Society in 2006.

In addition, he is the author of Tony Hinkle: Coach for All Seasons (1991) and The Golden Age of Indianapolis Theaters (2010).

Visitation is Thursday, September 14, from 2:00 to 8:00 PM at Castleton United Methodist Church, 7101 Shadeland Avenue, Indianapolis, with funeral services Friday, September 15, at 11:00 AM at the church.