Adam Grant to Speak at Butler

Author/professor/thought leader explains how people with groundbreaking ideas made them happen.

Adam Grant, one of the world’s 25 most influential management thinkers, will speak about “Originals: How Non-Conformists Move the World” October 4 at 7:00 PM in the Schrott Center for the Arts. 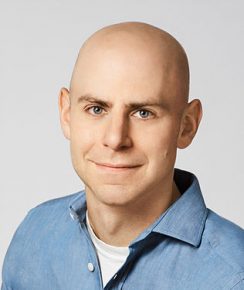 Admission is free, but tickets are required. Public tickets will be available beginning at 10:00 AM Tuesday, September 19, at the Clowes Hall box office and ButlerArtsCenter.org.

In his speech, Grant, a leading expert on how we can find motivation and meaning, and live more generous and creative lives, will explore how we can all get better at recognizing and championing new ideas, and how to build cultures that welcome diverse perspectives and honest feedback.

Grant is The New York Times bestselling author of three books that have sold over a million copies and been translated into 35 languages: Give and Take, Originals, and Option B with Sheryl Sandberg. His TED talks have been viewed more than 9 million times, and his keynote speaking and consulting clients include Facebook and Google, the NBA, the Gates Foundation, Goldman Sachs, and the U.S. Army and Navy.

He is the Saul P. Steinberg Professor of Management and a Professor of Psychology at the Wharton School of Business, where he has been the top-rated Professor for six straight years.

Grant has been recognized by Fortune’s 40 under 40, Oprah’s Super Soul 100, and a World Economic Forum Young Global Leader, and received distinguished scientific achievement awards from the American Psychological Association and the National Science Foundation. He writes for The New York Times on work and psychology, and serves on the Lean In board and the Department of Defense Innovation Board.

Grant, whose insights on unleashing originality have been praised by J.J. Abrams, Richard Branson, and Malcolm Gladwell, received his bachelor’s degree from Harvard University and his doctorate from the University of Michigan.