Hurricane Irma, Up Close and Personal

Vanessa Mackenzie ’15, who is teaching on the U.S. Virgin Islands, hopes to get back to her classroom soon.

September 6 was supposed to be the first day of school in the U.S Virgin Islands. Teachers like Vanessa Mackenzie were supposed to start lessons.

Then Hurricane Irma struck. You can’t hold class when a Category 5 hurricane is barreling through the Caribbean. 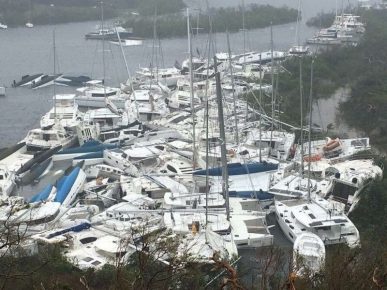 Some views of the destruction left behind by Hurricane Irma. (Photos by Vanessa Mackenzie)

Mackenzie, who graduated from Butler in 2015, had recently moved to the Caribbean and was slated to begin her first year of teaching on the island of St. Thomas. When we spoke the week after the hurricane, she was just hoping her students were safe and had a place to sleep.

“Half of my students live on St. John and the other half live in the part of the island that was completely devastated,” Mackenzie said. “I don’t know what kind of devastation they are going home to, or not going home to.”

It’s not only homes that are destroyed. Mackenzie said power lines are strewn across the streets. Cars have no windows. Trees are stripped bare.

With the island in disarray, citizens are on a curfew. They are only allowed outside between noon and 6:00 PM. During those hours, Mackenzie said everyone wants three things: gas, ice, and water.

“It’s unbelievable how important those things have become,” said Mackenzie, who stayed in a hotel on the south portion of the island during the hurricane—and returned to find her house still standing. “You need gas for your car and your generator, and water is essential on a Caribbean island.”

Citizens are unsure when the next shipment of supplies will come, so they are relying on the generators for power. “We need electricians, contractors, and construction workers,” Mackenzie said. “We need national help.”

For now, Mackenzie is running her generator for a few hours a day, just enough to keep food cold.

Those that don’t have internet are relying on word of mouth and the help of neighbors.

“Every time you approach someone in the street, they ask how you are and how your family is,” Mackenzie said. “There have been a lot of people helping and that’s the coolest part.” 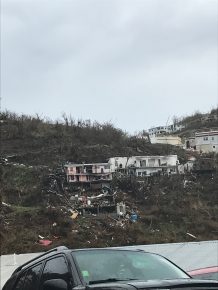 The islanders have been told it will take six to 12 months to restore power. There’s no word on when the students will start school again.

“Private schools are getting back in class sporadically,” Mackenzie said. “But I work for a public-school system and I lost all the windows in my classroom. The wall is concave.”

One of the school buildings that is intact is being used by the Red Cross for disaster relief.

“Coming back to school will be the only sense of normal stability for these kids. There’s no routine right now.”

The children are learning one lesson you can’t learn in a classroom though: resiliency.