Butler Bowl Gets a New Name

Stadium to be Named in Honor of Bud and Jackie Sellick.

The Butler Bowl, Butler University’s longtime home for football and soccer, will be officially renamed the Sellick Bowl on September 16 in honor of Winstan R. “Bud” Sellick ’47 and his wife, Jacqueline (Blomberg) ’44. 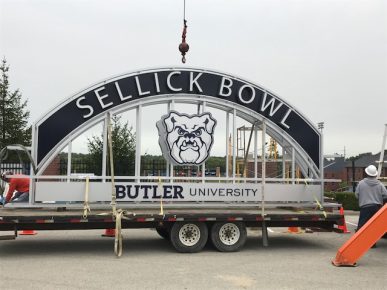 Butler President James M. Danko and Athletic Director Barry Collier will unveil the plaque during an invitation-only ceremony shortly before the 6:30 PM football game between Butler and the Taylor Trojans.

The Sellicks’ generosity toward their alma mater spanned a third of a century, and it culminated this spring with a $9.4 million gift from their estate that is being shared by Butler Athletics, the Lacy School of Business, and general University support.

“The Sellicks had a tremendous concern for the well-being of future generations of Butler students,” Danko said. “This generous gift will ensure Bud and Jackie’s wonderful legacy—that current and future Bulldogs will have access to the same great education and campus experiences that they enjoyed.”

The Sellicks had asked longtime friends Dan Yates and Bob Wildman to assist in the transfer of their final gift to Butler. Wildman noted that the Sellicks “were special people with a special place in their hearts for Butler.” 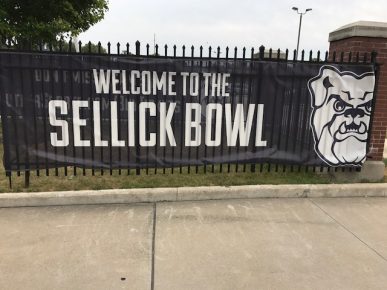 In 2007, Bud and Jackie Sellick received the Ovid Butler Society Mortarboard Award. In 2014, Bud also was honored when he received the Butler Medal. He also was a donor and strong supporter of Delta Tau Delta Fraternity.