Former U.S. Senator Richard Lugar and former U.S. Representative Lee Hamilton come from opposite political parties, but they came together at Clowes Memorial Hall to express the importance of civility in politics and in society. 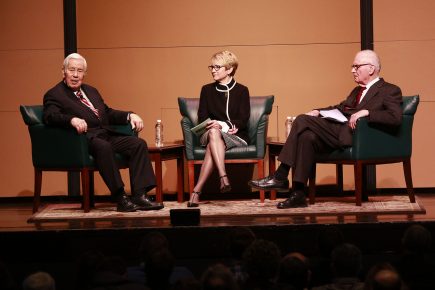 Speaking in front of about 700 people November 13, as part of Butler University’s Celebration of Diversity Distinguished Lecture Series, the two political leaders agreed that you can’t get much done in an uncivil atmosphere.

Lugar, a Republican, told a story about serving on the Senate Foreign Relations Committee and how the chair, whether a Republican or Democrat, strived for a unanimous vote.

Reaching a 19-0 vote “would take time and require a lot of civility,” he said.

“The level of discourse every now and then would become intense as you discussed difficult problems, but I do not ever recall the meetings becoming uncivil,” he said.

Hamilton said Reagan’s modus operandi would be to hand you a jar of jellybeans and ask you to pick one out. Then he’d psychoanalyze you based on the color you picked.

“They both had a marvelous human touch, and they always tried to end a meeting with a touch of lightness,” Hamilton said.

This was the second event in the 2017-2018 Diversity Lecture Series. The series kicked off in October with David “Olmeca” Barragan, a bilingual hip-hop artist and producer. Rev. Dr. Jamie Washington will present “Diversity and Leadership in the 21st Century” on January 24. Doris Kearns Goodwin, a world-renowned presidential historian, will present “Where Do We Go from Here: Leadership in Turbulent Times” on February 12. Ellen Hume, a veteran teacher, journalist and civic activist, concludes the series with “Media and Politics: Finding a Useful Path” on March 6.

At this lecture, Lugar, the longest-serving member of Congress in Indiana history (1976-2012), and Hamilton, who served in the U.S. House of Representatives from 1965-1999, were joined onstage by Ivy Tech President and former Lieutenant Governor Sue Ellspermann, who served as moderator. When Ellspermann asked the audience whether people came to the event because they thought today’s political atmosphere was uncivil, most of the audience members raised their hands.

Hamilton said sometimes problems are insurmountable, but ultimately, you’ve got to be pragmatic.

Lugar said the public can help the process by learning public speaking and how to frame an argument concisely. He suggested that students write for their school newspaper and participate in debate.

“Civility requires preparation,” he said. “Economy with use of language as opposed to babbling on and on and on.”

“Some of those people who claim to be the most bipartisan have a 99 or 98 percent record of support for their party,” he said. “Now, come on. Hold them accountable. That’s your job.”