The Year That Was: Top Stories From Butler In 2017

We started plans for a second Lab School and painted a 20-by-40-foot mural in Clowes Hall. We challenged the status quo, again, being named the Most Innovative School in the Midwest. We expanded, knocked down an old dorm, started building a new one, and hired a new basketball coach.

In 2017, Butler University students and faculty brought excitement and ingenuity to campus and the community around them. Here’s a look back at some of the top stories of the year. 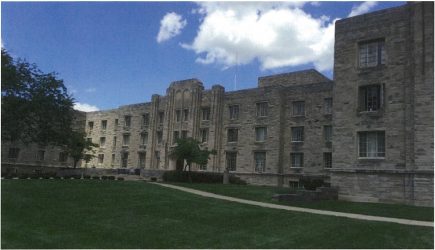 After more than 60 years, the Butler community said goodbye to Schwitzer Hall. The old dorm will be replaced by the new 647-bed student residence hall, set to open in fall 2018.

Items such as Butler’s live mascot bulldog, rare books, fine art, and observatory telescope, can now be insured by Butler’s student-run insurance company. The student-run operation received licensing approval from the Bermuda Monetary Authority, giving students hands-on experience that will prepare them for an industry that anticipates needing 400,000 new employees by 2020.

Support for the sciences

Enrollment in the sciences at Butler has increased nearly 50 percent over the last decade. And to support that increase, Butler alumnus Frank Levinson ’75 gave the University a $5 million gift that will go toward the transformation of Butler’s science teaching and laboratory spaces. These new facilities will enable Butler to collaborate with local and global science and health/life science companies. 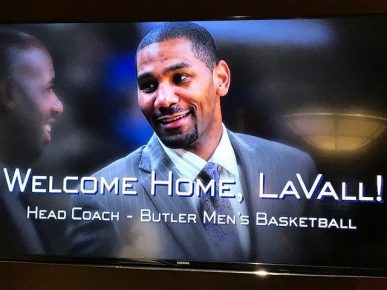 LaVall Jordan ’01 became the University’s 24th Men’s Basketball Coach in June, returning to the school where he both played and served on the coaching staff. He said he couldn’t, “…wait for the first game. When I hear the chant ‘B-U, T-L-E, R you a Bulldog,’ I may stop coaching for a second and turn around and say ‘Hell, yeah.’”

If all goes as planned, there will be two Lab Schools come fall 2018. The first Butler Lab School has been so successful that the Indianapolis Public Schools has asked Butler’s College of Education to create a second one. The plan is for the second school to be located at 1349 East 54th Street.

A new home for football and soccer

The Butler Bowl was officially renamed the Sellick Bowl. Butler’s longtime home for football and soccer was renamed in honor of Winstan R. “Bud” Sellick ’47 and his wife, Jacqueline (Blomberg) ’44.

A painting the size of a two-bedroom apartment 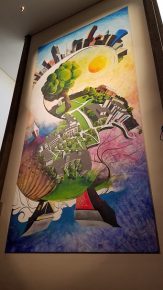 The Butler Arts Center unveiled its first commissioned piece, The Journey from Outside In. It was a 20-by-40-foot painting by Indianapolis artist Justin Vining that required 263 hours of work spread over three months and 25.5 gallons of paint. Vining’s painting, which will hang in the Clowes Memorial Hall lobby for a year, depicts sunrise over the Indianapolis skyline, the Butler campus, and farmland on the outskirts of town.

Butler was named the Most Innovative School in the Midwest Regional Universities category of the U.S. News and World Report rankings for the third straight year. This category was created by U.S. News three years ago “so high-ranking college officials could pick schools that the public should be watching because of the cutting-edge changes being made on their campuses.”

Butler got 40 acres larger with the official purchase of property and buildings from Christian Theological Seminary. Butler’s College of Education will move into the main building on the CTS campus beginning with the 2018–2019 academic year. CTS will continue to reside on campus in a part of the main building, counseling center, and apartments.