When Ed Tinder ’71 decided to retire as Executive Director of the Catholic Youth Organization (CYO) in the Archdiocese of Indianapolis—a position he held for 33 years—he hoped someone with excellent credentials would want to take over.

He got his wish when Bruce Scifres ’79 was hired. That’s Bruce Scifres who coached local high school football for 37 years, winning seven state championships in 27 years at Roncalli High School. The Bruce Scifres who was inducted into the Butler Athletic Hall of Fame in 2007. 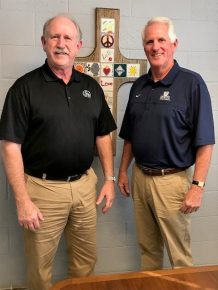 “That a coach like this, as prominent as he is, was interested in this position pumped my chest up because it shows that what you tried to build over 33 years is attractive,” Tinder said, sitting across from Scifres. “There were 80 applicants for the job. When somebody like Bruce, a Hall of Famer, applies, you feel like the job is pretty important.”

Tinder was doubly happy because Scifres is a Butler guy.

“I think there’s something to the Butler Way,” Tinder said. “Being part of a community like Butler for the years you’re in school, I think you adopt an outlook on life, about how you’re going to lead your life, in every aspect. You adopt an attitude of helping people and service. That maybe got our feet in the door as Head Football Coach at a high school or Executive Director of CYO. It’s just the mindset on life, the attitude on life we got while we were at Butler.”

By his sophomore year at Butler, Ed Tinder knew he wanted to teach and coach. He credits his Butler coaches—Tony Hinkle, Bill Sylvester, Don Benbow, and others—with that. “These were individuals I just wanted to be like. I wanted to help people.”

After graduating with a major in Education, Tinder was hired at Roncalli High School, where he taught Social Studies, World History, Economics, and Drivers’ Education for nine years and was Head Football Coach from 1977–1979. (He took over from Bill Kuntz ’50, who played football at Butler, and his successor at Roncalli as Head Football Coach was Bill Kuntz’s son Bill Jr. ’75, another Butler grad.)

In spring 1980, Tinder moved to the CYO. He worked for four years under Bill Kuntz Sr., then became Executive Director.

Tinder said 15,000-20,000 young people in third grade through high school participate in CYO activities, which include 13 sports, music competitions, science fairs, hobby fairs, a chess program, and more. The Executive Director oversees a $5 million budget and answers to a 21-member board.

“You are, to a large extent, creating the climate in which all the activities are going to take place,” he said. “This is how we’re going to do things. So you take a little bit of that outlook on life gained through your education and your time spent at Butler University in the classroom and on the athletic fields and that becomes part of you when you administer a program like CYO.”

Tinder said he loved the job because people “are invested, and they’re emotional. That’s where I got my fuel for continuing for 33 years, to be able to work with people and interact through those kinds of emotions. I enjoyed it immensely. I miss a great deal of it, but you know when it’s time to move on.”

Bruce Scifres, who took over in June at the CYO, said he sees his role as a continuation of what Tinder established.

“I love it here,” he said, “and Ed has been amazing in helping. He’s answered tons of questions. Beyond that, if a Director is judged by the people he has hired to work for the organization, Ed Tinder was a master of his trade. The culture he developed here I feel blessed to be a part of.”

Scifres started at Butler as a Business Administration major—”It took a second-semester Accounting class to help me decide I didn’t like certain aspects of that”—and finished by majoring in Social Studies and Education.

A year after graduation, he was hired at Roncalli. He spent three years there, then moved over to public schools for seven years. In 1990, he returned to Roncalli as the Football Coach and Social Studies teacher. (He later taught weight training and was Assistant Dean of Students.) Part of his duties were Field Manager of the school’s football stadium, where he spent most Sundays. “I saw a lot of CYO games,” he said.

He also watched plenty of the games in which his two sons and two daughters played.

Scifres said he was attracted to the CYO job because “we’re doing something worthwhile. We’re doing something to help other people. That’s why people get into education. What other job could I do at this point in my life that would have as much of an influence on young people?”

Scifres turned 60 in February, and he knows he doesn’t have 33 years to devote to the CYO. But he said he plans to give his all to the role.

“As a coach, part of your job is to teach kids how to play a game—strategy, get them in shape, organize, practice hard every day, and teach them how to win,” he said. “But I’ve always thought the more important part was to teach kids how to live their lives. They should strive each day to give their best to be the person God created them to be and make their parents proud and do all the things they have an opportunity to do through athletics.”