Be a Positive Force for Others, Singh Tells December Grads 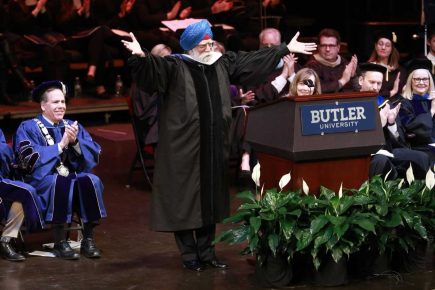 “You already know that many of you will travel to destinations outside the familiar,” Singh, a prolific Indianapolis-based artist who came to the United States from India 50 years ago, said during the December 16 ceremony at Clowes Memorial Hall. “You will be facing an increasingly interconnected and intensely competitive world. Immersing yourselves and understanding cultural and civic frameworks in place will be an important first step to unlocking your first doors. Know that there is much to learn from other struggles and experiences.”

Singh, who was awarded an honorary doctorate, said he and his family were among the millions who faced life and death challenges at the time of the Partition of India in 1947 and during their escape to safety in the new India. His goal since then has been to radiate a spirit of “Charhdikala” (positive optimism) in all seasons “and dedicate my life to ideas that make a difference.”

He recommended that the graduates “be a willing shoulder and positive force for others,” and that they shape a future that best reflects our collective gifts and universal hopes.

Singh also said the graduates should leave behind unfounded stereotypes of faiths, cultures, and communities different from their own.

“In today’s multicultural society with a wide spectrum of backgrounds, lifestyles, and perspectives, it is critical to adopt and exercise the art and spirit of mutual respect; be a trusted team player; and as a leader, to tap all talents for the tasks at hand,” he said.

Robert Postlethwait advised the graduates to “take care of your brain, feed the hungry, and routinely evaluate the impact you’re having on people and issues you care deeply about.”