The New York Times has selected Butler English Instructor Alessandra Lynch’s Daylily Called It a Dangerous Moment as one of the 10 best books of poetry in 2017. 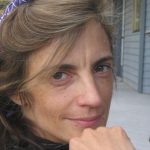 “You can read 20 pages into Lynch’s book before you fully realize it’s about a sexual assault—and this is to her credit,” wrote David Orr, author of the “On Poetry” column for The New York Times Book Review. “She wants to show an act of violence in all its terrible particularity and also in the way it becomes a background against which identity trembles and sometimes fractures. It’s difficult to read this collection without thinking about how timely it is, but its force is in no sense dependent on that congruity.”

The full article is here.

Lynch is the author of three collections of poetry: Sails the Wind Left Behind (winner of the New York/New England Award from Alice James Books, 2002), It was a terrible cloud at twilight (winner of the Lena-Miles Wever Todd Award, Pleaides/LSU Press, 2008), and Daylily Called It a Dangerous Moment (Alice James  Books, 2017). She has received fellowships from The Corporation of Yaddo, the MacDowell Colony for the Arts, and the Vermont Studio Center, and she has been the recipient of a Barbara Deming Award and a Creative Renewal Fellowship for the Arts from the Indianapolis Council for the Arts.