Wherever you look during the Phoenix Theatre’s upcoming production of the play Halftime With Don, Butler Theatre will be well represented.

Onstage, Michael Hosp ’08 will be playing Ed, an aspiring sportswriter who meets his football hero, a man suffering from traumatic brain injury. The technical aspects of the show will be handled by Jeffery Martin, who studied at Butler from 2005-2009. And behind the scenes, Corbin Fritz ’18 is interning as he prepares for a career as a director.

“Education and the training of the next generation of theatre artists are an integral component of the mission of the Phoenix Theatre,” Producing Director Bryan Fonseca said. “We are fortunate to have an ongoing relationship with the Butler Department of Theatre.”

Over the past decade, Fonseca said, the Phoenix has hosted Butler interns, employed faculty members, collaborated with the department on projects, entertained and educated students through a formal program of attendance, advised incoming new students for the past five seasons, and employed former students as actors, technicians, and staff.

“I think our relationship is a successful model for professional training,” he said.

Let’s meet the Butler participants in Halftime With Don, which runs January 12-February 4. 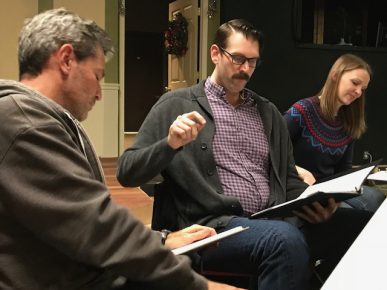 Michael Hosp, center, with fellow cast members Bill Simmons and Chelsea Anderson at a table reading of “Halftime With Don.”

Michael Hosp grew up a couple of miles from Butler and went to school to be an actor. Ten years after graduation, he continues to rack up credits both day and night. In addition to performing in several other plays at the Phoenix, he’s appeared in and directed shows produced by several of Indianapolis’ most inventive theatre companies, including NoExit, EclecticPond, and Know No Stranger.

Hosp also has worked on adaptations of two Kurt Vonnegut books for the IndyFringe stage, and this past summer he was in the Indianapolis Shakespeare Company’s presentation of As You Like It.

Theatre is his full-time job too. During the day, Hosp works as an Actor-Interpreter at The Children’s Museum, where you might find him in the atrium dressed as a Transformer, or in one of the galleries doing a serious monologue while portraying historical figures such as Otto Frank, the father of Anne Frank.

“It’s a good day job in the sense that it’s creative and it’s different every time,” he said. “My work here at the museum and my work outside, they both help. I’ve become a better actor by just having to perform every day. And kids, you never know what they’re going to do or say. So that definitely helps the improvisational skills.”

Halftime With Don playwright Ken Weitzman, who was in Indianapolis for the first three nights of rehearsal, said casting Hosp as Ed is an unusual move since Hosp is significantly taller than Bill Simmons, the actor who plays Don.

“But there’s something really to me compelling about this big guy with this hero worship for a football player who’s not as big as him,” Weitzman said. “And Mike has a real good instinct for the part.”

Hosp said Butler gave him a great education in how to approach not only acting, but a career in theatre.

“The education prepared me to be a theatre artist and not just an actor or any one thing,” he said. “It’s so valuable to understand how to communicate and collaborate with designers if you are the director. Or as an actor, really understand how you fit into the stage picture at any given moment– to make choices that support the visual story that’s being told. I learned those things there.”

Jeff Martin knew he wanted to be in theatre, and at Butler he found a mix that allowed him to experience acting as well as behind-the-scenes work. 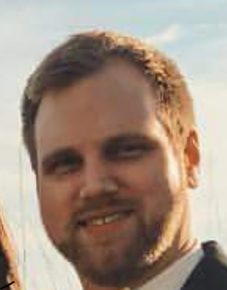 “It gave me a good head start,” the Griffith, Indiana, native said. “Butler gives everyone what they need. You just have to use it. People coming out of school who want to be actors—it’s hard. That’s a hard life. In the tech world, there’s a lot more stability.”

After graduation, Martin spent about a year in New York, where he did some acting and special-event tech work, including setting up the teleprompter and lighting for a speech by President Obama. He then moved to Atlanta and worked with theatre companies there for a couple of years, winning awards for his lighting work.

In 2013, he saw on a Butler listserv that the Phoenix Theatre was looking for a technical director. That’s been his full-time job ever since, and he’s earned some acclaim for his innovative work. Martin also has worked regularly with Young Actors Theatre and also collaborated with Hosp on the two Vonnegut shows.

Martin said the Phoenix keeps him busy, especially now that it’s getting ready to move into a new building just west of downtown Indianapolis. Having a fully rounded education has been important to his career, he said.

“If I only knew the tech side, for example, it wouldn’t be a good fit for the Phoenix or regional theatres around the country,” he said. “The people they want to hire—from my experience—are people who can wear a lot of hats. If you can’t, it’s hard to get your foot in the door. Have that cumulative experience is helpful.” 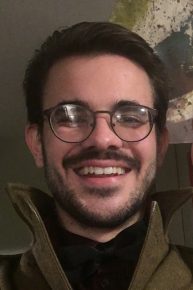 Corbin Fritz ’18 spent much of his winter break at the Phoenix Theatre, where he’s interning with Bryan Fonseca, the director for Halftime With Don. Fritz wants to be a director—he plans to move to either Seattle or Denver after graduation—and he said getting this experience has been valuable.

“All those actors are incredibly talented, and getting to work with Ken, the playwright, is super, super-informative and educational and also productive to the creative process,” he said. “To hear Bryan’s thoughts and analysis of the play and to be able to share my thoughts has been a cool honor.”

Fritz came to Butler from Noblesville, Indiana, planning to be an Education major, but he switched before classes started. During his time at Butler, Fritz has gotten a wide variety of experiences in acting, directing, and light, sound, and costume design. He’s studied at the Moscow Art Theatre, in London for a semester, and interned with the Indianapolis Shakespeare Company as an assistant director and production intern.

“I’ve been able to get all the education and training through Butler’s diversified theatre approach,” he said. “In the Theatre Department, we’re all theater majors—not theatre-acting, theatre-design, theatre-directing or anything like that. Wider and greater understanding of the art has been the biggest thing I’ve been able to come away with at Butler.”