MFA Grad Annie Sullivan Shows She Has the Midas Touch

Her first book comes out in August.

Annie Sullivan MFA ’12 finds herself wearing a lot of gold-beaded jewelry these days. What better way to call attention to the release of her first young-adult novel, A Touch of Gold?

On this particular early-winter day, she’s wearing a gold/orange beaded necklace that a friend gave her. Her bracelet is made up of strands of overlaid beads of gold, a gift from the Chicago Pearl Company to accent her outfits as she promotes the book. 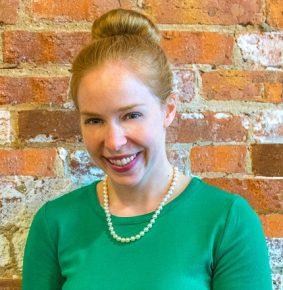 A Touch of Gold, which comes out August 14, tells the story of King Midas’ daughter, Princess Kora, 10 years after she’d been turned to gold by her father. She’s now back to life, but with some lasting side effects—one of which is that she can sense other objects her father turned to gold. When those objects get stolen, she goes on a quest to find them.

Along the way, Kora faces off with pirates and thieves and discovers not only who to trust but who she is. Ultimately, A Touch of Gold is about a girl finding herself and becoming comfortable in skin that makes her unlike everyone else.

Sullivan—the first fiction writer from the MFA in Creative Writing program to earn a book deal—said she and Kora have plenty in common, from their appearance (short in stature with long, golden hair) to their adventurous spirit, toughness, and sticktoitiveness.

“I write strong female characters who can stand up for themselves,” she said. “People who have a little Disney princess in them but also have that hardcore side where they say, ‘I can handle this.'”

But while Kora battles in the fantasy world, Sullivan must deal with the real world: the often exasperating, slow-moving world of publishing.

“Writing,” she said, “is not for the weak. You’ve got to have a strong constitution and be willing to never give up.”

Sullivan, who grew up in Indianapolis and earned her undergraduate degree from Indiana University, began writing her book as an MFA student at Butler. She chose Butler’s graduate program in Creative Writing because she found that it was open to many different styles of writing.

“People were writing ghost stories and middle-grade stories, and I’m over here writing fairy-tale retellings,” she said. “And they were open to that. I know there are other programs where they really look down on genre fiction and anything that’s not literary fiction.”

Still, Sullivan started off unsure. The first assignment she turned in was a short story about an old man whose wife died in a car accident. She hated the story and so did everyone else in the class. “I’m sure I went back to my car and cried,” she said.

Next came the breakthrough moment: She decided that the next time she submitted a story, “I’m going to turn in something that actually represents me.” 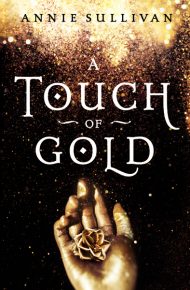 That story turned out to be the first chapter of what became A Touch of Gold. Her classmates recognized her passion, she said, and they approved.

“Annie was obviously very talented,” Associate Professor of English Michael Dahlie said. “But more important, she was wholly devoted to her writing. Her kind of unfettered and patient love of storytelling is always why people get book deals.”

Over the next seven years, Sullivan continued writing. Finished the first draft of A Touch of Gold. Read about agents (she recommends literaryrambles.com for that) and sent query letters to more than 100 before she found one who appreciated her work. Wrote a second book. Then a third. Attended the Midwest Writers Workshop. Revised the first book based on feedback from the workshop. Received a rejection from one publisher saying the book was too dark. Received a rejection from another publisher the next day saying the book wasn’t dark enough.

Finally, in August 2017, her agent called: She sold the book to Blink, a young-adult imprint of HarperCollins.

“You’ve got to be in this for the long game,” Sullivan said. “And it is a long game. It’s a game of timing and finding the right person who loves your work.”

Now, while she continues in her day job working for Wiley Publishing as copy specialist on the content-marketing team, Sullivan is working on another book, writing articles for Young Adult websites to help publicize A Touch of Gold, planning to attend the American Library Association’s midwinter conference to sign advance reader copies of her book, setting up school visits, and thinking about a book launch party in August.

She gives Butler’s MFA program a great deal of credit for her success—from providing her time and motivation to write, to having professors and critique partners to guide her writing, to having the freedom to tell the kinds of stories she likes to tell.

“I can’t describe how much they helped me,” she said. “Everything fell into place through Butler to make my writing dreams come true.”