Historical fiction novelist James Alexander Thom ’60 has been selected as the recipient of the 2018 Lifetime Achievement Award by the Indianapolis Public Library Foundation. He is only the third Hoosier author to receive this award. 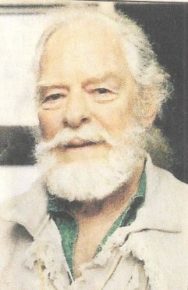 Thom studied English and journalism at Butler, after which he became a reporter and columnist for The Indianapolis Star, as well as a freelance magazine writer. His writing focuses on frontier and Indian Wars history, and his carefully researched novels have sold more than 2 million copies. Two of these novels were made into television films by Ted Turner and Hallmark.

Follow the River, a 1981 novel about a pioneer woman captured by Shawnee Indians became a New York Times bestseller and is now in its 50th printing. Panther in the Sky, his biographical novel about Shawnee chieftain Tecumseh, won the Western Writers of America Spur Award for best novel in 1989.

Years of research among Shawnee Indians for Panther in the Sky led to his marriage to Dark Rain, a Shawnee Indian with whom he co-authored the 2003 novel Warrior Woman. His most recent book, Fire in the Water, about the sinking of the steamboat Sultana during the Civil War, was published in 2016.

Thom was born in Owen County, Indiana, in 1933 and still resides there, in a log house he built himself. He is currently working on another American Indian novel and a memoir, and he is illustrating a children’s book.

“Awards come as surprises,” he said. “In my long lifetime as an author, I’ve never worked on a story with an award in mind. Storytelling is its own reward. It takes the cake. Good thing, because the pay isn’t all that great. Being able to live on your royalties, if you can, is icing on the cake. Then they surprise you with an award like this … and it’s like a bright candle on top of the icing on top of the cake.”

The Lifetime Achievement Award is a literary honor that seeks to recognize outstanding authors who have left an indelible mark on our state’s literary heritage. Thom’s life and work will be celebrated at the Indiana Authors Award Dinner on October 13 at Central Library. He will select an Indiana public library to receive a $2,500 grant on behalf of the Library Foundation.

In 2009, Thom won the library’s National Indiana Authors Award, and he received multiple nominations for the Lifetime Achievement Award. As one nominee said, “[James Thom] researches his subjects very carefully and makes historical characters come alive and their stories compelling and interesting to read. When he writes, it’s as if he has a paintbrush in his hand, describing every detail as though he were painting a picture. I can see each scene he portrays, and I feel as though I am there in that time and place. I can even smell the smoke of battle or bread baking in the oven. He cares about his characters and makes us care about them as well.”

In addition to his writing and journalism talents, Thom’s legacy includes serving as a professor and lecturer in the Indiana University School of Journalism and mentoring many people in the Indiana writing community over the years.

The Eugene & Marilyn Glick Indiana Authors Award recognizes Indiana authors’ contributions to the literary landscape in Indiana and across the nation. 2018 marks the 10th anniversary of the Award. The Indiana Authors Award is a program of The Indianapolis Public Library Foundation and is funded through the generosity of the Glick Fund, a fund of Central Indiana Community Foundation.