On the Curling Team, These Students Sweep Together

Butler’s curling team shows it has the stones to compete.

The history of curling can be traced back 500 years to the frozen lochs of Scotland.

The history of curling at Butler University is a bit more recent. 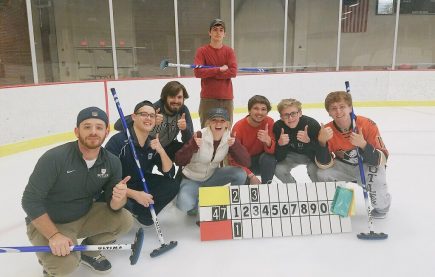 It all started with a group of Butler students who were inspired by the 2010 Vancouver Winter Olympics to try curling for the first time. At first, they were just joking around on the ice, but eventually they bought their own shoes and brooms and in 2012 started Butler’s very own club curling team.

Fast forward eight years. Jacqueline Murphy ’20, is the president of Butler’s club curling team. She was inspired to join during her freshman year because of her own background with the sport.

Murphy said that in her home town of South Bend, Indiana, curling is all the rage.

“Curling is the number one sport for student participation at Notre Dame right now,” Murphy said. “It takes places on a certain night of the week and they will have tons of students turn out just to go curling.”

Murphy and her father were always interested in joining in on the fun, but they never did.

Once she got to Butler and saw that there was a curling team, she felt she had to join. She and some friends decided to go to a meeting and try it out.

“When I told my family that I was the president of the curling club they were like, ‘Uhh what?’” Murphy said. “It’s a weird sport, you know? You never hear people say that they love to go curling.”

Last year there were only seven members of the team including Murphy, and they did not have enough members to compete. This year, the club more than quadrupled in size to an impressive 30 members. With this many people, the team now has enough members to participate in tournaments, which are known as bonspiels.

While this year’s team has enough people to compete, Murphy said that they are just working on the basics.

“No one that came out for the team this year had ever played before, except for one person, so everyone is a beginner,” Murphy said. “We really didn’t expect so many people, but it is so much fun.”

The team practices at the Circle City Curling Club, which is housed within the Indiana State Fairgrounds, a 10-minute drive from campus. They meet every Thursday night and practice by playing in tournaments against each other.

While the team practices, the executive team members are visiting and researching different bonspiels that the team could compete in next year. The club was invited to compete at University of Colorado and University of Oklahoma, but there are other tournaments in Chicago and Minnesota that the team is considering as well.

As far as the team roster goes, Murphy said she is just going with the flow. Anyone can invite a friend to join the team, and even staff and faculty are welcome to join in the fun. Joey Calvillo, Butler’s Residence Life Coordinator, is a member of the team.

Calvillo said that he is always glued to his TV during the Winter Olympics. When he saw a blurb in the Butler Connection about a meeting for the curling club, he reached out to the executive members of the team to see if he could tag along.

While Calvillo is still a novice, he said that the most exciting part of the club is seeing students leading the charge and getting out of their comfort zone.

“I got into student affairs so that I could work with students and be around students, and it has been really awesome to be there and see them in their element and also just to be an active participant,” he said. “That’s been the great part: seeing it from a staff member’s perspective of getting students connected to something that they wouldn’t have possibly done outside of here. I think that’s one great thing about Butler in general; they provide so many of those types of experiences that students would not have been able to access [otherwise].”

The next big event for the team (outside of weekly practices) is a viewing party to watch the 2018 PyeongChang, South Korea, Winter Olympics. Their emphasis is sure to be on one sport in particular.