In a speech titled “Leadership in Turbulent Times”—but one that could have been called “The Nine Habits of Highly Effective Leaders”—historian Doris Kearns Goodwin told a packed Clowes Memorial Hall at Butler University that past presidents have much to teach our current president.

“What history reveals is that even though problems change over time, there are traits—behavioral patterns—held in common by our most successful leaders,” she said in a speech on Monday, February 12, as part of the Celebration of Diversity Distinguished Lecture Series. 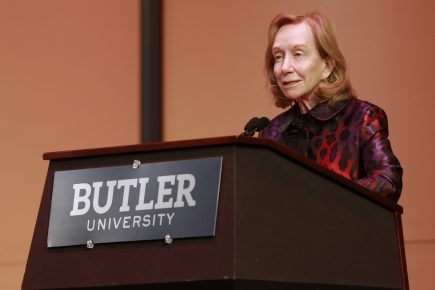 Goodwin, who worked for President Lyndon Johnson and has written extensively and to great acclaim about the Roosevelts, Abraham Lincoln, John F. Kennedy, Johnson, and other presidents, said the greatest leaders:

“In almost every instance where positive change has come to our country, where the country has moved closer to regaining its original ideals of equality and opportunity, it has come from social movements,” she said, citing the anti-slavery, progressive, civil rights, women’s rights, gay rights, and environmental movements as examples.

“We’ve done it before as citizens,” she said. “We can do it again.”