The production of Sense & Sensibility now running at the Booth Tarkington Civic Theatre in Carmel, Indiana, is more than a production of Jane Austen’s beloved novel—turns out, it’s a gathering of Bulldogs. 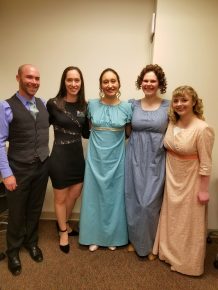 John Michael Goodson, the Director, is an Adjunct in the Dance Department, where he has taught since 2011. Deena Fogle, the Stage Manager, earned her Master of Science in School Counseling in 2013.

“Then one night at rehearsal we were talking about our lives outside of the rehearsal room and realized that there were lots of us!” Speckman said.

Sense & Sensibility follows the fortunes (and misfortunes) of the Dashwood sisters—sensible Elinor and hypersensitive Marianne—after their father’s sudden death leaves them financially destitute and socially vulnerable. Set in gossipy late 18th-century England, the show examines our reactions, both reasonable and ridiculous, to societal pressures. When reputation is everything, how do you follow your heart?