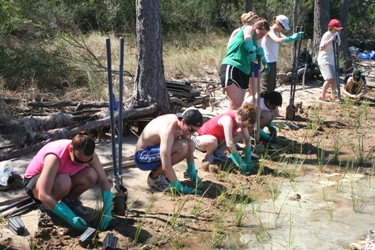 Twenty-eight Butler students and three staff advisors worked with Community Collaborations International to rebuild coastal areas, protect wildlife and give back to the Pensacola community during their seven-day stay. The group stayed at Camp Timpoochee, a 4-H camp made up of cabins and staffed by locals.

While past ASB trips have taken place in states such as Tennessee and New York, this year students wanted to go somewhere warm.

“Having some downtime after volunteering to enjoy the sun really kept everyone’s spirits up this year,” said Ashley Drees, ASB executive board president.

On the first day of the trip the students and staff worked in the city of Valparaiso and helped open the waterways into the coastal areas by tearing out weeds and replanting irises which naturally filter the water. The second day the group built oyster beds in a site off the coast which create a natural barrier against the waves that erode the shoreline and create unnatural currents. Days three and four included work on a woodpecker habitat, planting emergent sea grasses in Panama City and cleaning up a state park. Remaining days were spent enjoying the Florida sunshine.

It was unanimous that the trip was a success. Butler staff and students’ hard work even gained interest from the local community.

“I loved the service this year because you could see the difference we were making each and every day,” said Matt VandenElst, ASB executive board vice president. “One of the leaders of the camp where we were staying said that because of what we were doing he was getting calls from people asking how they could get involved too.”

One thing that sets Butler’s alternative breaks apart from other schools is the number of students and faculty that go on each trip. While some schools will send smaller groups to several different sites, the Butler ASB executive board chooses one site where they can send everyone.

“We were told that the work we did would have taken three years to complete, but we were able to do it in a week because of the massive numbers we brought in, which was really great,” Drees said.

Besides seeing the difference they make in the communities they help, alternative spring breakers gain something else as well: friendships with students and staff at Butler they may not have otherwise known.

“It’s remarkable to see how they get along and talk about their experiences, and how the alternative spring break influences and changes them,” Pakenham said. “It’s really neat to go through the week and see those changes and hear them talk about them as well; that’s definitely my favorite part.”