Butler Theatre students Shane Tarplee and Abby Hart star in The Phoenix Theatre’s production of The Storytelling Ability of a Boy, running now through March 27 in the Frank and Katrina Basile Theatre, 749 N. Park Ave., Indianapolis. 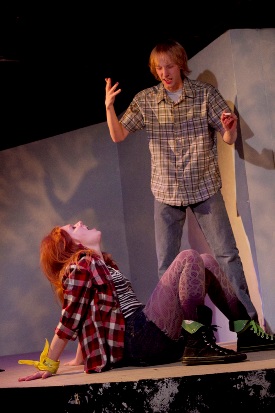 The Storytelling Ability of a Boy follows outcast students Peck (played by Tarplee) and Dora (Hart) and their English teacher, Caitlin (Carrie Schlatter), through a few weird weeks during Peck’s senior year of high school in an unnamed American town. Caitlin, an attractive, newly divorced teacher, has moved to the town in hopes of a fresh start. Peck, her prize pupil, is a gifted and imaginative teenager who possesses an incredible talent for telling and writing stories. His intelligence and his sensitive nature unfortunately make him socially awkward at school. His best friend, and the object of his romantic interest, is a rebellious and brooding classmate named Dora, whose smart mouth and negative attitude make her less than desirable as a companion for Peck, as far as Caitlin is concerned.

“The language of this play is unique,” director and Phoenix Producing Director Bryan Fonseca said. “Throughout the play, (playwright Carter W.) Lewis utilizes an interesting dramaturgical device that shifts the narrative between characters, creating a format that allows the audience to view the same story from diametrically opposite points of view.”

The Phoenix Theatre is Indiana’s only professional contemporary theater, and has presented productions to challenge and entertain the Indianapolis community for 28 years. An Equity house, the Theatre presents the Midwest and Indiana premieres of many popular Broadway and Off-Broadway plays, and has presented more than 82 world premieres in its quarter century. This is the Midwest premiere of The Storytelling Ability of a Boy.