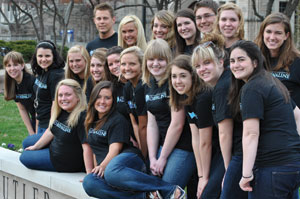 Butler’s student advertising club, ADrenaline, will advance to a second consecutive National Student Advertising competition in June. Butler is 20 universities that will vie in San Diego for the national title and $3500 prize, sponsored by the American Advertising Federation.

Each team makes a 20-minute pitch of an advertising campaign developed for JCPenney,designed to attract female shoppers ages 25-34. Judges include JCPenney executives.

Butler earned a $500 prize and its national bid as one of two first-place finishers in regional competition in Southfield, Mich. on April 15. ADrenaline won regionals in 2010 with a campaign for State Farm Insurance, and placed second in the 2009 regional, in its first year to compete.

This year’s regional judges awarded ADrenaline 71.4 points out of a possible 80, according to faculty advisor and journalism instructor Donna Gray. “The judge said we truly captured their audience, which is difficult to do, since these students are not that audience’s age,” she said. ADrenaline also earned points for strong use of mobile media applications and its online partnership with personal style blogger Jessica Quirk.

Butler students decided to show images of advertised products and clothing, but to digitally edit out the people wearing the outfits, she said. That way, no specific model is associated with a product.

JCPenney owns all campaigns submitted for the competition. Company representatives at the regional event indicated “that they are already seeing ideas that JCPenney wants to use,” Gray said.

ADrenaline will present its competition entry Monday, April 25, to members of the Indianapolis chapter, American Advertising Federation, at 11:30 a.m. in the Krannert Room, Clowes Memorial Hall. A Ball State University team will also present. The campus community is welcome to attend.