Stephen Duncan, a junior bassoon performance major, has been named the alternate in the International Double Reed Society’s Young Artist Competition, considered the world’s most important contest for bassoonists ages 22 and younger. 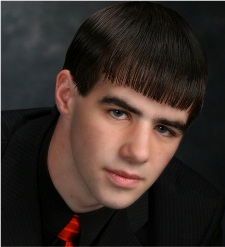 Being named the alternate means that, if one of the three finalists is unable to attend the finals for any reason, Duncan will take his or her place and compete for first place.

Duncan said he will be attending the convention in June in Tempe, Ariz., and “it is an accomplishment that will speak volumes on my resume.”

“To me, this is an unreal experience,” he said. “Although 30 competitors may not seem like a lot, they came from some of the top conservatories and music programs in the world. The fact that a player like me could be up near the top of those 30 gives me a lot of confidence in myself and my playing, as well as confidence in my choice to come to Butler and study with my teacher, Dr. Douglas Spaniol.”

Spaniol said Duncan is “an exceptionally bright and talented student. This shows that he is one of the most promising young bassoonists nationally and even internationally. I expect that he’ll have many more impressive accomplishments in the years to come.”

The three finalists in this year’s Young Artist Competition include musicians from France, Venezuela and the Juilliard School of Music.

Duncan, who is from Bloomington/Normal, Ill., began playing bassoon in seventh grade. He started on the oboe, because his father is a successful professional oboe player and he wanted to follow in his footsteps.

“When it became clear that I wasn’t meant for the oboe, I was gently nudged in the direction of the bassoon,” he said. “Things took off from there.”