Butler’s Eugene Ratliff Endowed Chair of Finance Roberto Curci has been awarded a Fulbright Scholar Program scholarship that will enable him to spend the fall semester teaching and doing research in Hong Kong. 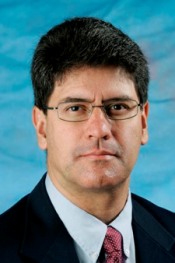 Curci said that, as an academic representative for the United States, he will use the Fulbright, which supports him and his family with money for travel and living expenses, to accomplish three things in Hong Kong.

He will teach a class in the prestigious Master of International Banking and Finance Program at Lingnan University, a school with which Butler has a longstanding relationship.

Also, he will examine the internationalization patterns of firms in Hong Kong and the nearby Pan-Pearl River Delta region. Curci said he will apply the Value Chain Internationalization Framework he and two colleagues at Butler, Robert Mackoy and Noriko Yagi, developed to examine firms’ internationalization phenomenon in that area. The hope is to determine whether and how firms in this world region evolve from being domestically focused to being internationally engaged, and to identify factors that drive or impede success during that process.

Finally, he will be looking into further developing program activities for the College of Business’ graduate programs with Lingnan University and other universities in Asia.

The Fulbright Scholar Program, the U.S. government’s flagship academic exchange program, is administered by the Council for International Exchange of Scholars (CIES) on behalf of the United States Department of State, Bureau of Educational and Cultural Affairs. Curci, who joined the Butler faculty in 1999, teaches classes in international finance, international business, financial markets and institutions, and derivative markets. He had been scheduled to be on sabbatical for the fall semester.

“I feel honored to get this Fulbright scholarship,” Curci said. “It’s very prestigious and very competitive. I thought, ‘The worst that can happen is they would say no.’ I feel lucky to get it.”

The Fulbright program was proposed to the U.S. Congress in 1945 by then freshman Sen. J. William Fulbright of Arkansas. Fulbright viewed the proposed program as a much-needed vehicle for promoting “mutual understanding between the people of the United States and the people of other countries of the world.”

Curci is one of three members of the Butler community to receive a Fulbright award this semester. Seniors Caleb Hamman and Adam T. Weaver received Fulbright Student Fellowship awards.