Blue II Is Riding In Style

Blue II, Butler University’s bulldog mascot, will be riding around for the next two years in the new Blue II Mobile – a 2011 Transit Connect XLT provided by Don Hinds Ford in Fishers. 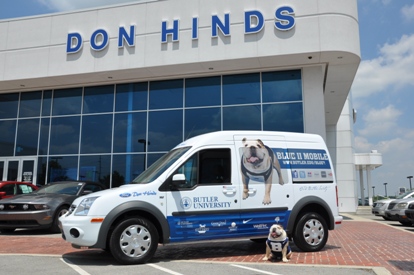 The Blue II Mobile features oversized pictures of the 7-year-old English bulldog on the outside, as well as information about his website (www.butler.edu/blue2) and his associate sponsors (Nike, City Dogs Grocery, Good Dog Hotel and Spa, Holistic Select, Woodland Animal Hospital, WellPet and the Butler University Bookstore).Pictures can be seen here.

The vehicle will be used for transportation to and from campus and appearances around the Indianapolis metro area. It is provided by Karen Colglazier ’70 and Bud Colglazier, who owns Don Hinds Ford.

Michael Kaltenmark, Blue II’s handler and Butler’s director of web marketing, said the vehicle will get great use.

“On behalf of Blue and Butler University, I am grateful to Don Hinds Ford for the use of this perfectly suited vehicle,” he said. “The Blue II Mobile certainly is a benefit to me and further reinforces the great quality of life that we are able to provide to Blue. Moreover, the marketing opportunity this provides Butler is both distinct and valuable. Blue and I are proud to represent Butler and Don Hinds Ford as we traverse the Indy metro area in the Blue II Mobile.”

Blue II keeps a busy schedule. His upcoming appearances include:

-The IPL 500 Festival Parade (May 28), where he and Kaltenmark will ride in a vintage automobile.

-“Butler Night” at Victory Field on June 4. Blue II and Kaltenmark will be throwing the first pitch and singing “Take Me Out to the Ball Game” at the Indianapolis Indians’ game against Syracuse.

-Lucas Oil Raceway on July 30 for the NASCAR Nationwide Series race, the Kroger 200 benefitting Riley Hospital for Children. As featured guests of Kroger, Blue II and Kaltenmark will participate in driver introductions, the parade lap and give the command for drivers to start their engines.