Students’ I FIGHT Campaign a Winner for YSC

The boxer’s sweat-soaked hair, grimy bandaged hands and penetrating gaze tell you she’s not backing down. So does the scratched but bold lettering of words surrounding her image on the poster. 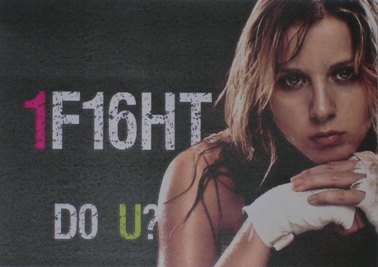 Students in the fall 2010 Strategic Communication for Nonprofits course developed 1F16HT, or “I FIGHT,” a communications campaign designed to educate college-age audiences about breast cancer, for The Young Survival Coalition’s (YSC) Indiana chapter. YSC plans to make IFIGHT materials available for use by more than two dozen affiliate chapters later this year.

“We were very impressed with the quality and creativity of the campaign ideas the students developed and ultimately finalized with the IFIGHT materials,” said Julie Burns, national affiliate coordinator for YSC. “The materials themselves, along with the event they held on campus, were extremely thoughtful and truly fulfilled the goal we hoped to accomplish — spreading the word that young women can and do get breast cancer.”

The edgy, eye-catching visuals they chose for I FIGHT use Leetspeak, or “leet,” a form of writing primarily used on the Internet, in which some letters of a word are replaced by numerals and symbols. In leet, “I FIGHT BREAST CANCER” became “1F16HT BREA5T CANCER.”

“Our IFIGHT logo is unique and really caught the attention of the students and representatives at Young Survival Coalition,” said Keyler, a senior who is completing a spring internship with the corporate sponsorship program of the Indianapolis 500 Festival. She oversaw the I FIGHT campaign’s $1,800 budget, event planning and some public relations. “We came together as a class to create a great campaign that really resonates the message of YSC,” she said.

“The whole message behind I FIGHT is no one should fight breast cancer alone,” said Qualls, a junior currently interning with the Indianapolis Colts. The campaign team wanted not only to inform people, she said, “but to also encourage people to lend a helping hand because that is what Young Survival Coalition does.”

While working on logistics, events and the campaign presentation to YSC, Qualls thought about family members and friends who have had breast cancer. “No matter if you are keeping someone with cancer in your thoughts and prayers, or you take them to each doctor’s appointment, every little bit helps the fight,” she said.

The IFIGHT creative team introduced its theme to the Butler campus on posters and postcards, and through Facebook and Twitter statuses. This two-week “teaser phase” was followed by a “pledge phase,” during which time the campaign team urged fellow students to take actions against cancer, including engaging with YSC.

Individuals who signed a pledge sheet received an “1F16HT with____” button that they could personalize with the name of an acquaintance fighting cancer.

On Dec. 6, the campaign culminated with a YSC 1F16HT event in the Atherton Union Reilly Room, featuring games, food, music, prize giveaways and more pledging. Mock sumo-wrestling and competitions adapted from the “Minute to Win It” TV show reinforced the fight theme.

Although that evening’s temperature plummeted below zero, more than 100 students came to the event, said Ed Kanis, who co-teaches the course with strategic communication instructor Donna Gray. The campaign’s pledge sessions provided more than 200 email addresses for follow-up by YSC, he added.

“What came out of the YSC project shows what our students are capable of delivering,” Kanis said. “The campaign was of such high quality that YSC thought it could be taken to a national level.”

He said the students took ownership of the project at the start. “They were willing to work outside of class times; they knew they were doing something special.”

The course is offered through the College of Communication’s Center for Strategic Communication for Nonprofits, which Kanis directs. Each semester, students work with a different area nonprofit , effectively becoming its communications agency for those months. Previous clients have included the Indianapolis Opera, Young Audiences of Indiana and Saving Orphans Through Healthcare and Outreach.