Dick Burck, who was a fixture on the Butler campus for decades, died June 21. The story below was written by Christopher Goff ’12 for his Feature Writing class in spring.

Dick Burck usually doesn’t care for dessert, but on this night he tops his supper of grilled chicken, zucchini, and a slice of beef smothered in gravy with a piece of apple pie. He pushes the whipped cinnamon topping to the side of the small, green plate and jabs with a fork. 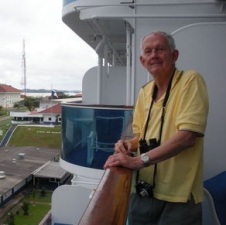 “Delicious,” Burck exclaims, eyes expanding. “Matter of fact, it may even be better than that!”

Dwight Eisenhower was president when Burck ate his first meal at Butler University in the summer of 1958. He’s been a regular ever since.

“Some days it’s great,” he said. “Other days it’s strange, but I really like the variety.”

Following the death of his second wife, Anita, in 1993, and his retirement in 1994 from a 20-year career as a speech teacher, Burck visits the school cafeteria three times a day. Breakfast. Lunch. Dinner.

Donning a plaid, multicolored shirt, Burck is greeted as, “Mr. Dick,” the title added by foreign students who learned Burck’s name was also a vulgarity.

Burck remembers Annie Taylor, whom he demanded interview in Auburn, N.Y., in 1999 for the reporting job she’d later accept. He remembers her first words: “Hi. Who are you?”

Burck remembers the turkey and mashed potatoes of Miss Annie, although “picking favorite foods is almost like picking amongst your children.”

Burck drives away in a silver, four-door Honda Civic. He’ll return in the morning for his two eggs over easy.

“There’s something about this place that just fits,” Burck said. “I enjoy people. Eating by myself is some variety of punishment.”