Butler’s chapter of Phi Delta Chi, a co-educational pharmacy fraternity, was recently honored for raising the most money for St. Jude Children’s Research Hospital out of all 65 Phi Delta Chi chapters. The students raised $11,426 – their highest ever – by offering Zumba classes on campus and through a letter-writing campaign to family and friends. 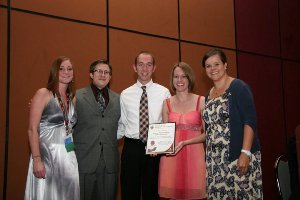 The Butler students received their award at the fraternity’s Grand Council meeting in Buffalo, NY.

“Dr. Todd Hrubey and I are proud of the work the student members of the chapter did to raise the MOST money of any Phi Delta Chi chapter in the country. Quite an accomplishment!” said Bonnie Brown, associate professor of pharmacy practice and co-advisor with Hrubey for Butler Phi Delta Chi.

All Phi Delta Chi chapters have been raising money for St. Jude’s since August 1995, when the fraternity formally adopted the hospital as its philanthropic partner. In the summer of 2009, the fraternity completed its first naming opportunity for the hospital’s outpatient pharmacy by raising over $200,000. The current fundraising effort is a 10-year $1 million campaign to name an inpatient room and adjoining parent room in the Patient Care Center.

As president of Butler’s chapter, Bill Burke ’13, said he is honored to be a part of such a worthwhile cause. “I enjoy hearing the positive stories about how the St. Jude community has impacted a child and their family’s life as a result of the funds my brothers and me help raise.”