Butler Newsroom > College of Communication > Journalism > Collegian Staff Puts On First-Ever Journalism Boot Camp
State of the University With Bulldogs In the Streets, the Streets Are Cleaner

By Ali Hendricks. The Butler Collegian

Writers at Butler University’s student newspaper The Butler Collegian’s can’t be successful without good editors. That was the theme of the paper’s first-ever journalism boot camp: teamwork. 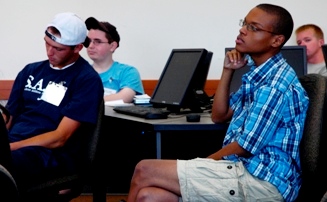 The weeklong boot camp included speakers, workshops, staff meetings and a social hour for this year’s staff in the hopes they would be more unified and educated when producing the newspaper.

Collegian Editor-in-Chief Hayleigh Colombo said plans for boot camp started in May when she and faculty adviser Loni McKown were throwing around ideas for how to improve the paper.

“Once we came up with the idea of having the staff use the week before their classes started to get motivated and excited about the newspaper, we knew we had to do it,” Colombo said. “And what better way than by having them learn from Indianapolis professionals they really respect?”

This year, McKown was able to use her skills to lead forums early in the week. She scheduled an impressive array of Indianapolis professionals to provide their expertise in writing and editing workshops.

“I’m so pleased with how it turned out,” McKown said. “The experts were excited, and the staff had a positive experience.” 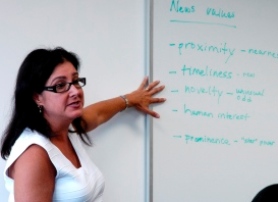 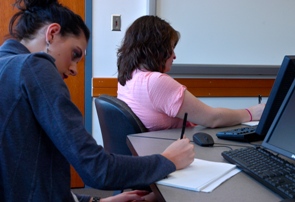 First-time staff member and freshman Taylor Cox said she appreciated the time spent with the staff and learning before the year even got started.

Thanks to the three-hour photojournalism course taught by Gentry, Cox said she feels much more prepared to incorporate what she already knows into her new role as The Collegian’s assistant photo editor.

“This way is so much better,” she said. “It’s one thing to say I have a degree in something and another to say I’ve actually done it for real.”

After boot camp ends, the Collegian staff will be doing it for real, and hopefully better than ever.