Jared Schuerman didn’t envision his first week at Butler University quite like this, but here he was, pulling weeds near Indianapolis’ Fountain Square neighborhood. 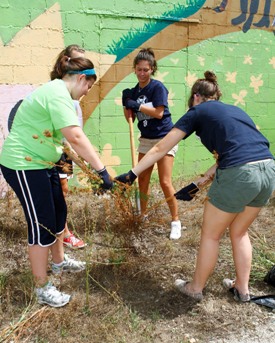 “I don’t mind it,” the pre-physician’s assistant major from Burlington, Wis., said. “It’s pretty fun so far. Interesting to help out the community, get involved, meet new people.”

Those are many of the reasons Schuerman and 384 other Butler students fanned out to 14 locations around the city Tuesday afternoon. They were participants in Bulldogs Into the Streets (BITS), the annual Welcome Week activity that offers students the chance to get to know the Indianapolis community by volunteering for a number of worthy organizations.

The project Schuerman and about two dozen other students worked on involved clearing the weeds and cleaning up a three-block bike path in the North Square area, just north of Fountain Square. The path will be a connector to Indianapolis’ Cultural Trail, an urban bike and pedestrian path that connects neighborhoods, cultural districts and entertainment amenities.

Working not far from Sherman were Beccah Rendall, a political science major from Mishawaka, Ind., and Jenny Reifenberg, an exploratory major from Chicago. The two first-year students hadn’t met before.

“I did this to meet more people,” Reifenberg said as cars buzzed by below on I-65.

“It’s a little hard to meet people sometimes, some of the (Welcome Week) stuff is so fast,” Rendall said. “But when you get to slow down and talk to people, I like doing things like this.”

Senior Mallory Owens, a biology major from New Palestine, Ind., volunteered to participate in BITS “to get into the community and try to clean up the city a little bit.” She hadn’t participated as a freshman, but she was glad to be involved now for a number of reasons.

“It’s nice to meet all the new freshmen and see how enthusiastic they are, even about pulling weeds,” she said. “I hadn’t been to Fountain Square before. I tend to stick to the Butler bubble, unfortunately, which is why it’s great to get out here.”

Across the street, Matt Hostetler, the green-space director for Keep Indianapolis Beautiful, and Karl Mueller, a resident of the North Square neighborhood, were working alongside a half-dozen Butler students. They were clearing out a rock garden and small green space.

Both were glad to have the Butler volunteers.

“Our neighborhood should have come up with them, but it’s hard to get people to jump in,” Mueller said. “I do what I can, but it’s a big area and it takes a lot of manpower.”

Julie Pakenham, associate director of PuLSE (Programs for Leadership and Service Education), which coordinates the BITS event, said the activities went well across the city.

“It’s my hope that students get a taste of volunteering in Indianapolis,” she said, “and that it encourages them to return and do ongoing service in the city.”