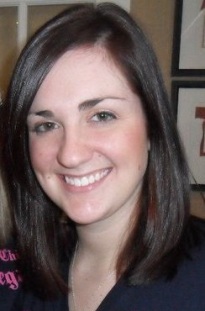 Why did you choose Butler? When I toured Butler, I immediately felt at home. I also liked the size, because I wanted to have a personal relationship with my professors.

Most memorable academic experience(s) at Butler: The Washington, D.C., Learning Program in spring semester of my junior year (2011). I loved my internship at C-SPAN, and the city itself. In fact, I loved it so much I stayed for the summer, and interned at the Newseum [an interactive museum focused on the history and business of news coverage].

At C-SPAN I was the intern in the Programming Operations Department. I was near the control rooms for all three networks. I would list the programs of the day on a white board for everyone to see, keep track of the progress of the programs, and type graphics and IDs. I worked with line-producers everyday to keep their program schedules flowing. The interns had lunch with Brian Lamb, C-SPAN’s founder and CEO, twice during our internships. He was personable, and I learned a lot from him during those two lunch hours. (He was also rooting for Butler during the NCAA championship!) He is someone I admire in the media world.

At the Newseum, I was the Web intern in the Broadcast Department. My supervisor was Online Managing Editor Sharon Shahid, who has worked for USA Today. The head of the department was Paul Sparrow, who is an Emmy Award-winning television producer. I was responsible for coming up with Facebook and Twitter posts. I also wrote four stories for the Newseum’s home page while I was there. I wrote the September 11 ten-year anniversary story for the online exhibit . I also helped interview Newseum visitors about their experiences during September 11. The videos are featured in the online exhibit.

Originally, I thought I wanted to be an on-camera newsperson. However, after working at C-SPAN, I have found that I enjoy working behind the scenes. I now want to focus on production, rather than on-air.

At the Newseum, I enjoyed the discussions, not on the subjects in the news, but about the news. The Newseum is founded by the Freedom Forum, which is dedicated to protecting the First Amendment. On Facebook, I would try to post questions to spark a discussion on ethics and other issues with news. I like discussing and learning about these topics. I would enjoy furthering my studies, and possibly becoming a media or communications professor.

Activities you’re involved with outside of the classroom: Member of Alpha Chi Omega and the Public Relations Board for Student Government Association. Secretary for the Society of Professional Journalists. A lifeguard at the Butler Health and Recreation Complex.

The most important thing you’ve learned at Butler: I came in a biology major, and am leaving with a degree in electronic media and political science. At Butler, I have been allowed to explore, and find what areas I excel in and what interests me.