The Johnson Room Gets a New Name And A New Look

The Johnson Room in Robertson Hall has a new name – the Johnson Board Room – and a new look that includes a 2,120-square-foot mural that covers its walls. 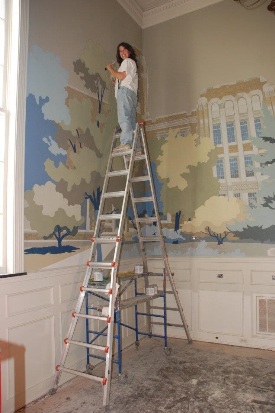 The mural depicts seven of the most iconic images on campus, including the fronts of the Holcomb Observatory and Atherton Union, the Robertson Hall chapel and the Persephone statue in Holcomb Gardens.

You can see the transformation of the room at facebook.com/bliceedwards.

“The Johnson Board Room will be a showcase space on the Butler campus,” said Craig Hardee, Butler’s general construction maintenance manager. “It is THE formal facility on campus, and it was very tired and in need of TLC. This room will be our Board of Trustees meeting room and a showcase room for campus and all of its constituents.”

The room, previously traditional, is being made over for the first time in more than 20 years with new carpet and angled walls near its giant window. When work is finished on Oct. 15, the back of the room will have counters for food service and other uses. An acoustical ceiling will absorb and reduce reverberation time, creating a softer feeling in the room. Sound blankets will be installed on the mechanical equipment that supplies the room to minimize/eliminate the low mechanical hum that resides within the room.

But the focal point is the mural.

Christopher Blice, founder/CEO, and Jon Edwards, cofounder/artistic director, of Blice Edwards, which created and is painting the mural, said the project started with photographs of existing buildings. Then those pictures were transposed into line drawings that are projected onto the wall. 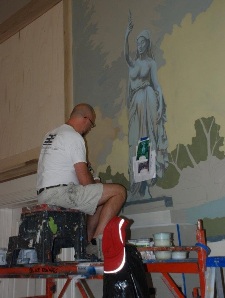 “The scale is so large that drawing them freehand would be nearly impossible,” Edwards said. “When you are close to the wall it is difficult to see the entire image. Because of the large scale and the angle at which you will see them, we used a forced perspective. This accentuates the immense size of each building and each mural.”

“We want the viewer to feel the importance of this mural through a clean line, stylized technique capturing the ionic structures of this beautiful campus,” he said. “We hope this will be a part of the Butler campus for decades, and hope the future generations will be inspired from this mural and ponder why the select structures were chosen for this room.”