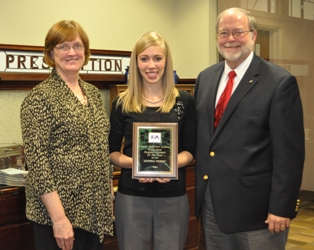 Pharmacy student Kristina Niehoff ’12 was recently chosen as the Outstanding Pharmacy Student of the Year by the Indiana Pharmacists Alliance (IPA) for her exemplary leadership and service. Butler Professor of Pharmacy Practice Bruce Clayton accepted the award on Niehoff’s behalf at the IPA’s annual meeting in September.

Niehoff holds several leadership positions including: president of the Pharmacy Class of 2012;

volunteer director for the Butler University Community Outreach Pharmacy; and volunteer coordinator for Phi Lambda Sigma, a pharmacy leadership society. She is the recipient of the 2011 Leadership Award from Phi Lambda Sigma and was named a Top 100 student in 2009.

“I’m honored that the IPA committee selected me for this award among the many deserving candidates,” said Niehoff. “I’m involved on campus and in the community just because I enjoy using my knowledge and skills to help others, so this unexpected nomination and award was tangible recognition for my dedication to pharmacy.”

Upon graduation in May 2012, Niehoff plans on pursuing a pharmacy residency so she can be directly involved with patient-focused care and work with physicians and nurses to ensure the practice of evidence-based medicine.

“I’ve had a wonderful experience with the Butler pharmacy program and have gained valuable knowledge and experiences to make me a well-rounded pharmacist,” said Niehoff. “I look forward to what my future holds knowing that I feel very prepared to start a career that has been grounded in the education I received at Butler.”

Niehoff was nominated for the award by College of Pharmacy and Health Sciences Assistant Dean for Student Affairs and Associate Professor of Pharmacy Practice Bonnie Brown.

“Kristina has shown great leadership and service to the college, university, and to the profession during her college years,” said Brown. “She has a bright future and will make an outstanding resident for any program, as she has shown a strong ability to multi-task and a deep dedication to the profession of pharmacy.”