James M. Danko will be inaugurated as Butler University’s 21st president during an installation ceremony at 11 a.m. Saturday, Nov. 12, in Clowes Memorial Hall. 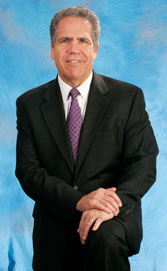 The inaugural celebration, called “Imagine the Possibilities,” will showcase the University’s creative talents while honoring and welcoming President Danko and his wife, Bethanie, to the Butler family. The Dankos came to Butler from Villanova University, where Jim Danko served as the Helen and William O’Toole Dean for six years.

The approximately 90-minute ceremony will begin with the processional of delegates from different universities, the Board of Trustees, vice presidents, deans and student leaders entering the hall. Margaret Brabant, chair of the Faculty Senate, will open the event.

The Butler Wind Ensemble and Chorale will perform, then Danko will receive academic gifts, including the University seal and presidential chain, from faculty, staff, students and others, each of whom will speak briefly.

Danko will be introduced by his friend Ronald Langston, former director of the Minority Business Development Agency, U.S. Department of Commerce, under President George W. Bush.

After the new president’s address, the ceremony will end with the singing of the Alma Mater.

Danko took office Aug. 1, 2011. He has also served in leadership positions at Dartmouth College, University of Michigan and University of North Carolina-Chapel Hill. Prior to his academic career, he was a successful entrepreneur and business leader for nearly two decades in his home city of Cleveland, Ohio, where he established his own medical equipment company.

Danko joins a distinguished line of Butler presidents, beginning with John Young, who became acting president a year after the University was founded in 1855.

A number of public events are scheduled to coincide with the inauguration, including: