A Rare Find Made in a Butler Biology Lab

Associate Professor of Biology Phil Villani and senior Collin Bowman were looking for something in a Gallahue Hall lab – Villani doesn’t recall what – when they unlocked two cabinets filled with dusty, rolled-up charts depicting various animals.

Neither knew what they’d found, so Bowman went to the Internet to search. He discovered that what they uncovered were rare, valuable, detailed chromo-lithographs from the late 1800s that had been used as classroom teaching aids. 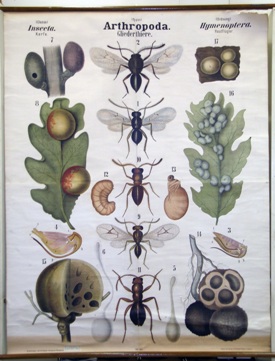 Some 42 of these roughly 4-foot-by-6-foot charts were the creations of Rudolf Leuckart, a 19th century German zoologist who was known for describing the trichinosis parasite, a source of serious, even fatal, infections in both humans and pigs. The charts primarily depict arthropods, worms and other creatures used to teach zoology.

Another 26 are by Paul Pfurtscheller, a high school teacher from Vienna who drew beetles, fish and frogs, for example, to help his students see more highly developed animals up close.

“They’re described as the PowerPoints of the late 1800s,” Villani said. “There are two sets of charts that the Biology Department must have purchased, probably, when they were back at the Irvington campus. There were a few faculty here that are now retired, who remember using them.”

The Leuckart charts are part of a series of 116 that the zoologist produced in 1877-1892. (More on Leuckart and his charts is available here.) The Pfurtscheller charts date from the late 1800s to approximately 1916. (Details about these can be found here.)

Villani said one of the only known complete collections of Leuckart charts is housed at the Marine Biological Laboratory at the Woods Hole Oceanographic Institute in Massachusetts, the premiere oceanographic institute in the world.

Butler’s charts are still being stored in Gallahue Hall for the time being, Villani said. He hopes they ultimately will be preserved in the rare books area of Irwin Library. Most of them are in reasonably good shape, considering their age.

He estimates the charts might be worth about $100 each, “but their value is actually from a pedagogical standpoint.”

“This was the first use of wall charts to teach with,” Villani said. “From a teaching standpoint and an artistic standpoint, they’re very important because they’re some of the first large-scale productions of art that was used to teach.”