Butler University is listed among the “Top Producers of Fulbright Scholars” in the Oct. 24 issue of the Chronicle of Higher Education. This is the first time Butler has appeared on Fulbright’s top producers list, which is compiled by the Institute of International Education. 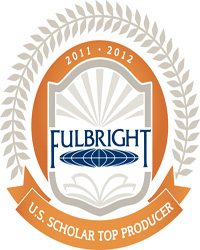 Since 2002, Butler has had 10 faculty and student Fulbright awardees. This past academic year, Butler had four – two faculty members Doug Spaniol and Roberto Curci and two students Caleb Hamman and Adam Weaver.

“I’m very pleased to see Butler on this list,” said Butler President James Danko. “A Fulbright is a prestigious honor and it reflects very well on our University.”

“Our Fulbright scholarships are one of many ways the University is cultivating global citizens and engaging in learning experiences with a global impact,” said Provost and Senior Vice President Jamie Comstock.

Butler’s Fulbright grant recipients will travel to four different countries to carry out their work.

Professor of Music Doug Spaniol’s award will enable him to teach at England’s University of York and restore pedagogical bassoon works by 19th century German bassoonist Julius Weissenborn. Spaniol, who has taught at Butler for 14 years, will spend January through June 2012 in England, while he is on sabbatical from Butler. At York, he will teach a class on the relationship between the analysis and performance of music. The research component of the grant will allow him to continue to re-create some of Weissenborn’s teaching materials that have been lost.

Butler’s Eugene Ratliff Endowed Chair of Finance Roberto Curci’s scholarship enabled him to spend the fall 2011 semester teaching and doing research in Hong Kong. Curci is teaching a class in the prestigious Master of International Banking and Finance Program at Lingnan University, a school with which Butler has a longstanding relationship. He is also examining the internationalization patterns of firms in Hong Kong and the nearby Pan-Pearl River Delta region.

Caleb Hamman’s ‘11 Fulbright is covering his graduate work in Irish Studies at Queen’s University in Belfast, Northern Ireland, as well as his research on youth and peace-building in Northern Ireland. His graduate studies are expanding on undergraduate research he undertook in Israel and the West Bank in summer 2010. Under a grant from Butler’s Peace Studies program, Hamman traveled to the region to interview residents about peace efforts there. Hamman was one of 26 recipients, out of 603 applications, to receive the Fulbright from the United Kingdom.

Adam Weaver ’11 received a teaching assistantship from France’s Ministry of Education that is allowing him to teach students at the Académie de Rouen in northern France. Weaver applied for the award through the U.S. State Department’s Fulbright Fellowship program and was one of 50 award recipients. The Fulbright Commission recommended Weaver to the French ministry.

Butler actively promotes the Fulbright program through the Butler Institute for Research and Scholarship (BIRS) for faculty and the Center for High Achieving Scholarly Engagement (CHASE) for students. In addition to inviting a Fulbright officer to come to campus to speak with faculty about grant opportunities, BIRS staff works with faculty members to assist with preparing their applications. Butler’s CHASE office helps students determine if they are strong candidates for scholarships and fellowships, including Fulbright. They then help students through the nomination and application process.

Currently, 10 Butler students and three faculty members have applied for Fulbright grants for next year.